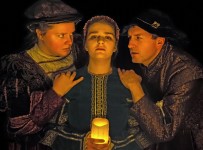 Through the narrow, raised doorway at Merchant Taylor’s Hall, settling in under the exposed roof timbers, the cast of York Shakespeare Project’s latest production assemble in the bright glow of the Great Hall chandeliers, in front of the grand empty fireplace crowned with the London Drapers Company Armorial Bearings (painted on wood before 1668). The smell of a thousand dead fires sits in the fabric of the room, the air is achingly dry and footsteps muffled. The honouring of the traditional pomp and ceremony of early theatre here in this space feels almost religious – the auditorium emanates a sense of worship and respect for something old and dusty. This is Shakespeare exactly as you would expect it. Leave your revolution at the door, because if you thought The Taming of the Shrew was heavy content… well, buckle up. Continue reading →

Just shy of four hundred years since its first performance, York Shakespeare Project turn their hands to Cymbeline, one of Shakespeare’s lesser-known works, for their thirty-fifth production since their formation twenty years ago. Director Ben Prusiner takes us back to Shakespearean roots with full Renaissance costume, live music and duelling rapiers while challenging Original Production values with gender-blind casting. Continue reading → 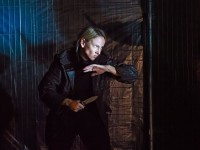 Number four in the countdown to completion of the York Shakespeare Project, Coriolanus serves up a simmering vision of strategic class war in ancient Rome via nineteen-eighties Britain. Images of Margaret Thatcher lurk in among bin bags and protest placards stating ‘Give Peace a Chance’ and ‘Corn not Scorn’. Plastic sheaths metal fencing upstage, veiling Frairgate’s black box space as a breeding ground for conspiracy and uprising in this effectively subtle, minimalist production. A disjointed score of upbeat eighties pop music and Thatcher’s ‘U-turn’ speech set the tone for the unsettling tale. Continue reading → 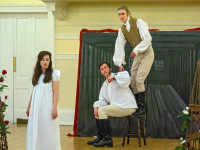 Austen meets Sharpe in this Regency-flavoured reduction of Shakespeare and Fletcher’s Two Noble Kinsmen, in which the playtime of performance gives a new lease of life to characters confined by war, law and societal expectations. Director Tom Straszewski brings considerable historical and geographical context to the chaotic happenings of the play to really make it sing. Women tamed and conquered, scorned and used and even driven beyond wit abound in this tragicomic production featuring as part of York’s Feminist Fletcher Festival. Deemed a marinated hangover of A Midsummer Night’s Dream tinged with influences of older, darker tales, Two Noble Kinsmen errs toward ambiguity and unfinished business. Folk flute and floaty dresses mingle with Macbeth-like harbingers, a modest colour palette of cream and dusty navy enhancing the mixture of oppression and vulnerability. The actors look to the audience often, as if prisoners pleading for forgiveness to save themselves from the gallows. Continue reading →

There’s a first time for everything, and today we share our first casting call. We suspect our readers may be interested to hear about this new call for York Shakespeare Project’s upcoming production of The Two Noble Kinsmen. Continue reading →

York Shakespeare Project go from strength to strength in celebrating the 400th anniversary of William Shakespeare’s death with their 29th play, this truly heart-warming rendition of one of the bard’s lesser (co-written) plays. Continue reading →