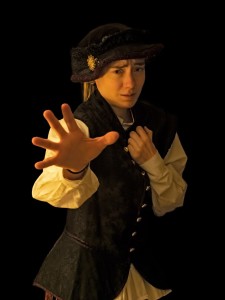 Just shy of four hundred years since its first performance, York Shakespeare Project turn their hands to Cymbeline, one of Shakespeare’s lesser-known works, for their thirty-fifth production since their formation twenty years ago. Director Ben Prusiner takes us back to Shakespearean roots with full Renaissance costume, live music and duelling rapiers while challenging Original Production values with gender-blind casting.

“Golden lads and girls all must as chimney sweepers come to dust.”

So, decorated with gorgeous madrigals, bawdy ballads and intricate fight choreography, this local community production will also explore how people defined genders in Shakespeare’s time and how we view them today. And… what exactly is a Cymbeline, when it’s at home?

The play tells the story of Princess Imogen, who has been imprisoned by her own father, the titular male (go figure) King Cymbeline. Under house arrest, she must survive a hostile courtship, a scheming Queen, and an attempt on her life. Far away in Rome, her banished husband, Posthumus Leonatus is surrounded by strangers intent on breaking their love. Meanwhile, armies muster as Britain looks to free itself from the Roman Empire. Can love survive distance, jealousy, and war?

“Such stuff as madmen tongue.”

Stemming from Ancient British legend, the play defies categorisation, having been described over the years as tragedy, romance and comedy. And centuries of interpretation will infuse this version richly layered with history, presented at the fourteenth-century heritage site of Merchant Taylor’s Hall, usually closed to the public. Prusiner says, “Cymbeline has always been one of my favourite Shakespeare plays, with exquisite poetry and thrillingly crafted dramatic scenes. For this production, I wanted the community cast (and audience) to experience the play alongside York’s rich history.

“We know that in Shakespeare’s time the London companies would tour to York, and while there aren’t specific records about Cymbeline, it seemed like an ideal opportunity to explore what a touring production might have looked like. We are excited to explore together how this ‘original setting’ shapes our perception of the play’s characters and plot twists.

“Ultimately, Cymbeline is a thrilling, funny, and poignant play that gets performed all too rarely in its full glory. We can’t wait to share it with audiences!”