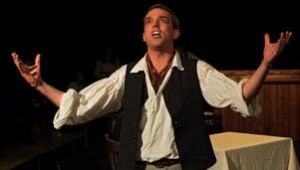 Andrew Isherwood is heartwarming as Pericles (Photo by John Saunders).

York Shakespeare Project go from strength to strength in celebrating the 400th anniversary of William Shakespeare’s death with their 29th play, this truly heart-warming rendition of one of the bard’s lesser (co-written) plays.

The digressive text has been abridged to a lean 90-minute run time and a cast of 9. This immersive, welcoming production serves almost as a layman’s summary version; refreshing and not at all heathen.

We enter The Gower Pub; a wholesome, earthy eighteenth-century seaside ale house full of merry regulars who come together to stage a play within a play, embracing each other and the audience with the utmost feeling of inclusion and nurturing. Watching the show feels rather like making a new group of friends and taking part in an improvisation workshop with them. Musical Director John Robin Morgan has arranged a rousing playlist of a capella sea shanties performed as punctuation between chapters by the cast and crew, all in period costume and milling about the encroached traverse stage with supportive smiles.

The play is truly moving, and hinges on the tight family trio of Pericles, (Andrew Isherwood), Thaisa (Claire Morley) and Marina (Emily Thane). Isherwood is gentle, genuine and natural. He elevates an ambling character to a heartfelt hero, whose later despair is utterly palpable. Morley is, in turn, charmingly coy and vulnerable as a young Thaisa, and later lurching and threatening as the Bawd. The meet-cute between Isherwood and Morley is on a par with Baz Luhrmann’s Romeo & Juliet. Rory Oliver and Jimmy Johnson stand out in charismatic, tender performances, each in multiple roles, and George Stagnell gives a solid performance as the wise Helicanus.

Thane is the sweetheart of the production. Her measured, graceful performance of the straight-woman whose appearance, following the loss of her mother, marks the turn of a light-hearted adventure story into a darker, more painful tale, is what really makes the show soar. While the ensemble have perfect comedic synchronicity, Thane carries the most transcendent lines and notes beautifully, not to mention multiple convincing fight scenes. The reunion of Marina and Pericles is desperately sincere, the audience sharing their acutely hopeful anticipation. This is a beguiling show.