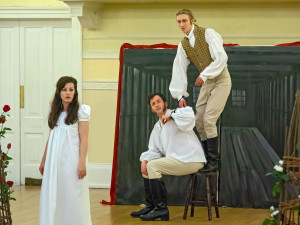 Austen meets Sharpe in this Regency-flavoured reduction of Shakespeare and Fletcher’s Two Noble Kinsmen, in which the playtime of performance gives a new lease of life to characters confined by war, law and societal expectations. Director Tom Straszewski brings considerable historical and geographical context to the chaotic happenings of the play to really make it sing. Women tamed and conquered, scorned and used and even driven beyond wit abound in this tragicomic production featuring as part of York’s Feminist Fletcher Festival.

Deemed a marinated hangover of A Midsummer Night’s Dream tinged with influences of older, darker tales, Two Noble Kinsmen errs toward ambiguity and unfinished business. Folk flute and floaty dresses mingle with Macbeth-like harbingers, a modest colour palette of cream and dusty navy enhancing the mixture of oppression and vulnerability. The actors look to the audience often, as if prisoners pleading for forgiveness to save themselves from the gallows.

We open on Hippolita (Val Punt) and Emilia (Jennie Wogan) who remain determined and fiery despite their recent defeat; the natural light of the early evening through De Grey Ballroom’s tall windows and the simple shift dresses emphasizing the power of simplicity and truth in this inspiring duo. A competent stick spar sets up the thread of Morris dance as an outlet for joy, as well as the weighty atmosphere of preparing for war. The delectably self-satisfied Theseus is played perfectly by Thomas Jennings and joined by the charming cousin kinsmen themselves. Jim Paterson delivers more Darcy than one could hope to squeeze into any other Shakespeare with his swaggering Arcite, while Rubén Wollny provides a pleasingly complementary soft-spoken Palamon reminiscent of Bingley. Ruth Boag-Chapman’s world-weary Gaoler and Meredith Stewart’s fresh-faced Gaoler’s Daughter offset the warning tones of what can be done to wear women down in this fraught world of kings and captures. Jess Murray continues in her vein of sweetly nurturing supporting roles as the Wooer, here inspired by York’s prototype feminist Anne Lister and adding to the queerness of the play in both gender roles and couplings.

“You make me almost wanton in my captivity.”

The jailhouse jest and philosophising by the kinsmen is a highlight; a handcuffed tussle and intimate exchanges bringing out the importance of friendship in strife. Another, more haunting, is in the darker shades of the play, in which Emilia weeps into a maid’s arms as she sings to distract her from the off-stage duel. No less disturbing is the abominably indifferent misuse of both the reluctant Wooer and distracted Gaoler’s Daughter in their engineered marriage, in which Murray is seemingly alone in her discomfort.

One of Shakespeare’s lesser-known plays, this is as usual full of superior poetry, here highlighted beautifully by a delightful ensemble.

Catch the show at The Dell in Stratford on Sunday 29th July at 7pm. Tickets and coach details can be obtained by emailing [email protected]