Cymbeline: Time’s up for our problematic fave 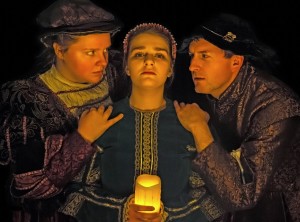 Through the narrow, raised doorway at Merchant Taylor’s Hall, settling in under the exposed roof timbers, the cast of York Shakespeare Project’s latest production assemble in the bright glow of the Great Hall chandeliers, in front of the grand empty fireplace crowned with the London Drapers Company Armorial Bearings (painted on wood before 1668). The smell of a thousand dead fires sits in the fabric of the room, the air is achingly dry and footsteps muffled. The honouring of the traditional pomp and ceremony of early theatre here in this space feels almost religious – the auditorium emanates a sense of worship and respect for something old and dusty. This is Shakespeare exactly as you would expect it. Leave your revolution at the door, because if you thought The Taming of the Shrew was heavy content… well, buckle up.

Director Ben Prusiner of Re:Verse Theatre – “classical plays that interrogate the vital issues of our time” – leads the community company in a faithful rendering of the last-but-three of their canon shows, and one of Shakespeare’s more obscure problem plays. Is it a comedy? A tragedy? A romance? It’s hard to tell at first, and after a few twists and turns in the first act, the second half only gets murkier and more disorienting. Alongside the long-suffering Imogen, (Bronte Jane Hobson) we spend a precarious three-hour torment wondering if our drink was spiked back at the bar, and what did we do to ever deserve any of these events? The script is a punishment. The prose is dry and gruelling, the incidents wandering, the intentions ugly. There’s little to like about many of the characters. It’s not a play one would list under the Bard’s Greatest Hits.

From the unctuous Iachimo (Jim Patterson) invading her privacy – whispers of “worst nightmare” are heard when he appears from the trunk – to Posthumus’ (Emma Scott) fervent dismissal, to Cloten’s (Carrie Morrison) bullish pursuance, to name but a few of her hells, we watch as Imogen is assaulted from every angle and yet remains somehow buoyant. This hangs weightily over the rest of the action; we meet some ghosts in a dream, Jupiter drops by to utter unsolicited intelligences, the woods are crawling with stolen princes and exiled princesses who for whatever reason all end up fighting in a war. It’s all very messy. And yet, odd lines glean laughs, and we end up with a hastily tied bow of a final chapter. It’s like a weekend night on Rougier Street.

The company all play their roles well, scarily good at delivering the whiplash turnarounds in mood and action that these shouting-toddler characters undergo. Hobson is understandably a favourite, while it is difficult to fall for anyone else, though the merry men in the woods make a solid trio in Rosy Rowley (Belarius), Thomas Leadbeater (Guiderius) and Sonia Di Lorenzo (Arviragus). Diana Wyatt plays a heartfelt, nuanced Pisanio, and Elizabeth Elsworth is grand and domineering in the titular role. These are talented people doing their best under the painful constraints of a dated text.

Minimal but statement set is wheeled on and off with maximum effort, conveying more grandeur and regality. Spanning the Renaissance and beyond, YSP mix costumes from a range of eras (designed by Cat Hudspeth) with Early music arrangements (directed and composed by Richard Morris) to create an incredibly haunting, alienating, musty piece of theatre that defies not just your willing suspension of disbelief but your patience. There is little interrogation to be had of the issues on the table. For anyone who even remotely considers the feelings of the used women in Shakespeare’s stories, let alone those who live through the kind of unrelenting oppression and harassment that Imogen does, one is forced to consider why, in 2019, we are returning to works of this ilk without making any social commentary at all. The actors fill the vast space with vigour, the audience expressing serene amusement, but nothing about the evening sits easy. Where is the #MeToo our heroines so desperately demand? It’s time we woke up and pushed our theatrical god off his pedestal.