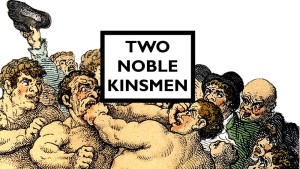 There’s a first time for everything, and today we share our first casting call. We suspect our readers may be interested to hear about this new call for York Shakespeare Project’s upcoming production of The Two Noble Kinsmen.

YSP, dedicated to performing all of Shakespeare’s plays in York within a period of twenty years, has arrived at Shakespeare and Fletcher’s adaptation of Chaucer’s The Knight’s Tale.

Two prisoners of war fall in love with their captor. One is freed; the other escapes. Will the result be comedy or tragedy?

Director Tom Straszewski of Bronzehead Theatre (Dracula, Henry IV, Richard II) says, “There is still time to join our cast for this tragicomic play of unrequited love, treachery and Morris dancing. Our setting is the early 19th century, in the immediate aftermath of the Napoleonic wars. Think Jane Austen, William Blake, and savage Gillray cartoons. Think the revolutionary fervour and excess of Lord Byron, and the proto-feminism of Wollstonecraft and Mary Shelley.”

The company is looking for a cast of 15-20 actors of any age, gender (cross-gender casting is embraced), background or experience level, to play everything from shining knights and stubborn queens to ignoble baboons and rustic Morris dancers.

Auditions will be held in the week commencing 29th January. To be considered, email [email protected] with a brief outline of your experience or a theatre resume, no later than Thursday 25th January.

Rehearsals will commence in early February and will take place in York, no more than two evenings a week plus Sunday afternoons. Performances will be in late April or the first week of May, at a central York venue. A condensed performance at the RSC’s Dell in Stratford is also planned.

Those interested can email Tom at the above address to arrange a meeting.

Read more about York Shakespeare Project and their past productions here, and about Tom’s previous work here.