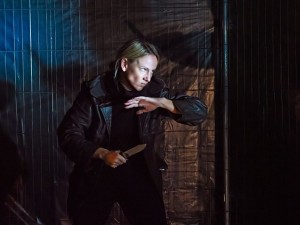 Number four in the countdown to completion of the York Shakespeare Project, Coriolanus serves up a simmering vision of strategic class war in ancient Rome via nineteen-eighties Britain. Images of Margaret Thatcher and Brexit (“There is a world elsewhere”) lurk among bin bags and protest placards stating ‘Give Peace a Chance’ and ‘Corn not Scorn’. Plastic sheaths metal fencing upstage, veiling Friargate’s black box space as a breeding ground for conspiracy and uprising in this effectively subtle, minimalist production. A disjointed score of upbeat eighties pop music and Thatcher’s ‘U-turn’ speech set the tone for the unsettling tale.

Standing to attention in all-blacks as if in a military drill, director Madeleine O’Reilly’s all-female cast then slip into gestural signature costumes in bright colours stark in the empty space, nodding at the Donmar’s female prison-set trilogy of 2016. Rowdy and fully convincing, this is a caucus that breathes from its diaphragm. Jenny Jenkins opens the play with a rousing call to action of the Plebeian rioters, here made up of housewives and teenagers angered out of their homes to the street, almost indistinguishable from a crowd of miners’ strike supporters. Being on a level with the actors in the intimate auditorium brings real dynamism to the entreaty.

The commitment of the huge cast is palpable. While it is difficult for newcomers to follow the finer details of who is who, the energy carries you through the important moments. Emma Summers gives a solid performance as the bullish Caius Martius, owning the environment with appropriate Big Dyke Energy alongside a Helsing-esque Aufidius (Abi McLoughlin) despite later edits burying the play’s more prominently queer speeches. Although this Coriolanus is clearly here to take up space and not to make friends, she does elicit far more sympathy than is usually expected for the hated general.

Sally Mitcham and Jodie Fletcher offset the foreboding of the drama with sublime comedic timing and characterisation (How would your tribune eat a crisp?) as Sicinius and Brutus, while making room for particularly impressive performances from Maggie Smales as Menenius and Elizabeth Elsworth as Volumnia. Smales’ insidious inciting marks her Menenius as a shepherd of smarm and back-patting glory before delivering an immaculately balanced scene in her appeal to her enemies as a lullaby to rottweilers. Elsworth’s upright pride establishes the high bar of expectation placed on Martius’ shoulders, enabling a moving monologue entreating his return home from the revolt. The Patricians have chosen their perfect puppet, the people a fitting scapegoat, for their next moves in this fraught society. Aptly noted are those eerie lines begging comparison to the modern western world’s current political battleground.

“Their liberties; make them of no more voice
Than dogs that are as often beat for barking
As therefore kept to do so.”

The workings of the court are made plain, Martius wound up and set off like a spinning top to provide ample distraction from darker plots. As Menenius states, “This is the way to kindle, not to quench”; never more sorely felt than in the wake of Donald Trump’s plate-spinning choreography of attacks on marginalised groups and in an age when social media mobilises terrorists. Volumnia’s casual “Do they will” is comic in the moment, troubling in the truth – once riled, Coriolanus is set to boil over and enact his puppeteers’ plans.

“You have helped to ravish your own daughters.”

While the production feeds fire into the blood and provides the satisfying outburst one might wish of Theresa May on Question Time, it simultaneously warns of overheating, and somehow remains feeling somewhat safe. Returning to their blacks, the cast are stripped back to equals. The effect is less of internal dysfunction in fifth-century Rome; rather a collective intent about men, and now. Characters are invoked onstage with innumerable unforeseen “Here comes ___”, building a picture of women being called upon or called up. Echoing the question of culpability, Coriolanus leaves us considering at what point a cause is lost, and how we may save it. “I am hushed until our city be a fire. And then I’ll speak. A little.”