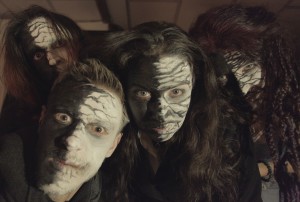 It’s hard to imagine blues rock combined with elements of electronica, hard rock and goth, but stickybackplastics managed to find a way.

The band from York have been together for over a year now and released two EPs. Their second one, Reptile Smile, was released at the end of March.

Guitarist Roz Walker and drummer Dom Smith spoke to Arts York about the band’s formation, their inspiration and how they’ve been working with other artists from the local music scene and beyond.

Q: How did stickybackplastics  come to be?

Roz: Heather Niven (vocals) and I were already great friends and are both artists exhibiting regularly together, sharing many common creative ideas and bottles of wine! Heather is a great singer and was keen to do some music, so we decided to start a band. As my musical background was classical violin, which was not entirely suited to rock music – although I now have an electric violin, which features in our songs Vampire and Ten Years – I thought it would be a better idea to learn the electric guitar – always a childhood dream anyway! This also proved to be a key to songwriting for me and, to my surprise, the songs came flooding out. We realised we needed other band members and as Heather knew Dom already, we asked him to join us on drums – this was last year in March, I think. We didn’t have a bass player at this stage so Rob Dann, a friend and member of Ravens, agreed to play bass for our first EP, which came out in May 2014. Max Watt (Maximum Wattage), a friend of Dom’s joined us a few months ago but has already become an indispensable member of the stickies!

Q: Why did you choose the name stickybackplastics?

Roz: We were talking about the use of sticky back plastic and Blue Peter and covering your books at school with it, as you do. Turns out Heather, from a working class Scottish home, had to use sellotape instead as sticky back plastic was too expensive and hard to get hold of, whereas I luckily had the real thing being more middle class. Who would have thought it would be such a class issue!?

We share a creative love of making and mending things using whatever is around – we once made an improvised mic stand using a swingball post, a piece of wooden beading and lots of sticky tape – so the name seemed appropriate and had a bit of an eccentric feel to it.

Q: You’ve described yourself as blues rock, what is it about that genre that particularly appeals to you?

Roz: I hate having to categorise music but given that you seem to have to these days, that seemed the nearest we could get to what we do – there are elements of grunge, goth, even a tinge of folk here and there as well. I have a particular love of blues – especially the old blues guys like Howlin’ Wolf, John Lee Hooker and Muddy Waters – their music is just so moving and honest with such great rhythm. I guess that underpins a lot of the songs we do but it is a long way from traditional blues. I also love loud rock, the grungy guitar sound and the energy of punk, so I guess we are some strange kind of hybrid of all that. 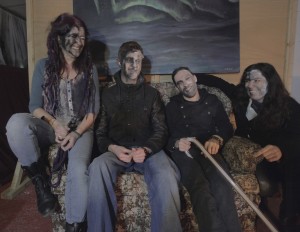 Q: There’s a bit of a melancholy sound in your songs, what makes you sway towards that?

Roz: Melancholy – yes, most of the songs are quite dark in their subject matter. I write songs about things that move me, whether from personal experience or things I see and hear about which resonate with me. I find it difficult to write happy songs and like the opportunity to express powerful emotions through words and music – sometimes it can be a very cathartic experience. I hate trite love songs full of clichés – there are too many of those around already – far more interesting and satisfying to explore the darker side of the human condition.

Q: What influenced the music behind your single, Psycho Dreamer?

Roz: I was playing around with my guitar effects and came up with the first chord sequence at the beginning of the track, which sounds a bit like a weird piano, and the idea of writing a song about a recurring psychotic dream just fitted that sound. I wanted it to sound a bit trippy and dreamlike but then becoming more heavy and with the relentless feel of a dream in which you know the outcome but can do nothing to stop it – hence the robotic sounding backing vocals. There is still that bluesy feel to some parts in the background but heavily coated with a more industrial feel. We love experimenting with different sounds and like to have variety and unexpected twists in our songs to make them, hopefully, interesting and a bit different.

Q: What influenced the lyrics?

Roz: I often come up with ideas for songs while out walking the dog. I was thinking about the idea of people who may have many different thoughts going on in their head, which another person, even the closest to you, would have no idea were happening. This developed into the idea of the possibility of someone having a persistent recurring dream in which they would kill their partner, who would have no idea about it and there would be no outward sign of anything amiss. There was something fascinating about such violence taking place, which leaves no visible trace except the dilemma of whether to discuss the phenomenon or not and what if anything would be the fallout from that. Also, the uneasy fear that one time it may happen for real during your sleep. I have to add that I have not directly experienced this myself and my husband needed a degree of reassurance the first night after he listened to it!

Q: You have a number of remixes from other artists on your Soundcloud, why do you have people do those?

Dom: Originally, I wanted to surprise the rest of the band as I’m pretty sure Heather and Roz had never really experienced remixing before! It was an idea I had, because we don’t gig a lot – luckily we all have pretty busy lives outside of music – I wanted to keep momentum going when we weren’t recording or gigging.

To be honest, it’s also always been a huge goal of mine to have an electronic element to music that I’m involved in, whatever the genre, so that’s another part of it. I wanted to get some cool people, friends of mine from the music industry, to work on our song and ‘Toxic Secret’ seemed like the most remixable option! It’s been wonderful to have acts like York’s Haxby Swango contribute alongside more renowned UK artists like Deathboy, as well as Tim Muddiman, who plays guitar for Gary Numan and Pop Will Eat Itself. We’re really lucky! We certainly want to work out a way to incorporate the remixes into our live show, one day! 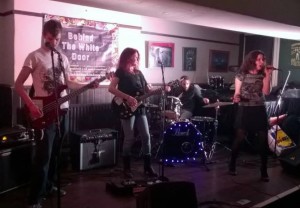 stickybackplastics live at Behind the White Door.

Q: Your first EP is available on a “pay what you like” basis. Why did you decide to leave it up to people what they want to pay?

Dom: I think it’s as simple as, we wanted people to hear our music when we released that first EP, the self-titled one. We’re grateful to everyone for taking the time to listen to our stuff, and we wanted to make it as easy as possible for them to be introduced to the band. Our latest one is available for £2.50 from Bandcamp. We really love that platform, and I’m hoping people will still invest in the new music that we’ve created. We’re really proud of it! But yeah, we’re just grateful to have people find our music and want to listen to us, or watch us perform!

Q: How do you get people to listen to your music and come to your shows?

Dom: Oh, man! It’s all down to Chris Sherrington, Chris Tuke (Fulford Arms) and Dan Gott (The Franceens, Behind The White Door)! They have been hugely supportive of our music and have come up with shows for us to play! We’re definitely so pleased that they’ve put so much trust in us – we do play a pretty raw live show! It’s guys like the aforementioned that make York’s music scene what it is today. Obviously, we want to play Fibbers and The Duchess, and for anyone that will have us really – if only to get better, and become more experienced as performers. We’ll always love the Fulford Arms and everybody that works there! To be honest, at the minute, it looks like we are only ever going to be playing in that venue! Ha!

Q: How have you been received?

Roz: We have been well received so far – our last EP has had a number of good reviews and we’ve had very positive feedback from our gigs. We’ve also been played on a number of internet radio stations and Jericho Keys at BBC introducing has supported us, with some good comments. We are continuing to pick up more followers on Facebook, Twitter and Soundcloud and are starting to become part of the York music scene, having played with great bands like Comply Or Die, JUNK, and The Hoolivans. That said, we’ve also had great feedback from the likes of Rhombus, X-Ray Cat Trio, and The Men That Will Not Be Blamed For Nothing after playing with them, so that’s great too!

Q: What plans have you got for the future?

Roz: We’re continuing to write and develop new songs with the intention of recording another EP by the end of the year. We’re also looking to do more gigs and have plans to make our show more visually stimulating, with ideas for video and face-painting – as in our band promo shots for Reptile Smile – if we can find enough hours in the day!