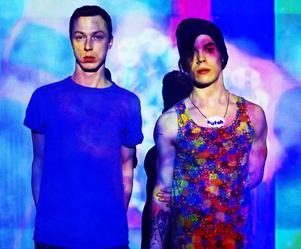 Haxby Swango’s debut free-to-download EP Banana Songs is out today and you can hear it here at Arts York.

It’s three tracks from the alternative electronic duo from York, which pull together a mixture of influences from R&B, rock, J-pop and electro-house. These songs are 5Deep, Raindance and Bye Bye…Explode.

The band is made up of a vocalist and a keyboardist, who call themselves Hutchy Swango and Jack Swango respectively. They formed during 2014 following the dissolution of the progressive rock band Astrae.

Hutchy says that the EP offers a “colourful picture of what this band is about” and says that it’s “a very strong foot forward.”

Have a listen by clicking on the tracks below and decide for yourself what you think: