The year so far for the Franceens 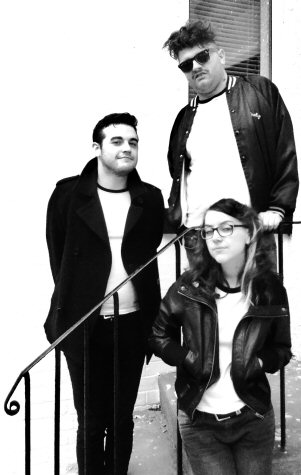 The Franceens are a 50s inspired garage punk three-piece (photo by Nebby Nebworth).

Though already known in York as a source of punk with a 50s edge to them, if you ask the Franceens about their progression they say that things have only just started to take off.

Consisting of Dan Oliver Gott on electric guitar and vocals and Naomi Westerman on bass, they were joined by Miles Morrison on the drums in February this year. Since then things have been moving upwards very quickly, with the band going on their first UK tour in March. According to Dan, Miles had to learn the set list “in about two weeks”.

The tour was self-funded, with any profits made going either towards petrol or back into the band.

Dan explained, “any money you get back, when we have, made your t-shirts. Then when you put that money back you get the next batch. Its the D.I.Y. way.”

“I would put the last pound that I have to this band.”

As a unit, it has been a time of growth for the Franceens, they have made it through that trial period every band faces of perfecting the sound for your outfit.

“When we did rehearsals today we started writing a new song and we just knew it wasn’t right. It was a good song but wasn’t quite what we want to be doing as a band. Before we would not have known that,” Naomi explained “but now know what we are doing and what we want to do.”

But even though the Franceens are moving out of York, getting around the country and developing “a soft spot for the travel lodge” they still have a place for their favourite city. They say that if popular demand says they should play a gig, they will do it. Also, check them out at their frequent Behind the White Door event.

One Response to The year so far for the Franceens