The Trick: Speaking to Angels 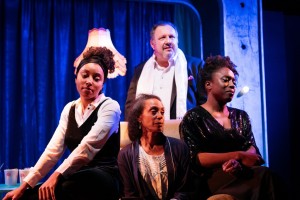 We do not always want to exorcise our ghosts. Not all our ghosts frighten us. Some ghosts are our angels, our protectors, too much of a comfort for us to let them go. In this, too, lies their frightening potential. This is the quiet tragedy of Mira (Lachele Carl), the elderly protagonist of Eve Leigh’s play The Trick.

Mira’s husband Jonah (David Verrey) has been dead for seven months, and she struggles to move on; she has no interest in the world outside her house, she refuses to feed herself regularly and she books appointments with mediums and fortune tellers to keep her mind closer to her husband. Her only solace are the regular visits of Jonah’s ghost, who slowly becomes her only reason to keep on living. This is the moving, beautiful core of a show that unfortunately often gets lost in its many confusing elements.

Mira spends her days sitting on an armchair in her apartment, trying to take care of a goldfish that she constantly forgets about. Carl is brilliant in her portrayal of Mira’s resigned routines, her self-induced tiredness and immobility. Her performance is by far the most striking and complex of the show: the character’s sudden burst of anger, stubbornness and rational curiosity are rendered to perfection and they allow us to see past the veil of grief that envelops her, catching glimpses of a nuanced, rounded self. The show is at its most moving in the small actions and simple dialogues exchanged by Mira and Jonah, who first appears, unaccompanied by ghostly changes in light or sound, to help her get rid of two make-believe plumbers (Ani Nelson and Sharlene Whyte) who are attempting to rob her of her money, taking advantage of her old age. It becomes clear that Mira and Jonah have been, and still are, each other’s worlds. Jonah is a warm, reassuring presence and a constant source of comic relief: he has clearly always been a larger than life personality, and death has not changed a thing.

The storyline suffers under the weight of a clunky, confusing framing. The performance is described as ‘a magic show’: there is virtually no magic involved, but magic is used as an overall metaphor and mirrored by a general aesthetic, in which Amy Mae’s lighting, filled with reds and blues, complements Jemima Robinson’s eye-catching and evocative design. Mira’s old-fashioned room is framed by an arch complete with velvety curtains, which starkly and masterfully contrast with the ‘dusty’ atmosphere of her surroundings. Following a Victorian variety format, the show jumps from scene to scene and from tone to tone. Tender moments between Mira and Jonah dissolve in a storytelling monologue, in explanatory reflections on old age and death or in interaction scenes with other characters, portrayed by talented ensemble members Ani Nelson and Sharlene Whyte. Yet, most of these scenes feel scattered and out of place and contribute to an overall impression of messiness. Towards the end, the show reveals its most awkward and uncomfortable moment, in which an audience member volunteers to have their palm read. Assumptions are made on this person’s death (ie: ‘your death will be painless’), and this is frankly a dangerous and questionable terrain to venture in. Moreover, audience interaction seems uncalled for in a show that struggles to find a tonal balance between seamlessness and artifice.

Lachele Carl shines with a stark, earthy portrayal of a woman who needs to learn, against her will, to live with absence. Her final goodbye to Jonah’s ghost is the peak of a remarkable performance. The show has the potential to be a strong meditation on different and complex stages of bereavement, and its reflections on the difficulty to part with our ghosts are moving. Despite all its problems, it is commendable that the show’s relationship with ghostliness rejects stylistic stereotypes to present us with a simpler, yet truer image of haunting.

The Trick was presented by HighTide and Loose Tongue in association with Bush Theatre, performed at York Theatre Royal Studio on Friday 12th April 2019.