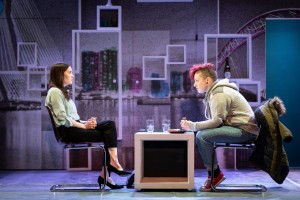 Jon Brittain’s Olivier Award winning Rotterdam is a tidily-packaged, light-hearted play that confronts the messy, fraught discourse of identity and its uncomfortable polygamous marriage to gender, sexuality and labels. Neatly designed and sensitively researched, its humanity sings through its excellent cast and softening Sappho-pop soundtrack.

Originally performed in a London studio in 2015, it seems even more appropriate to place the piece in the main house of York Theatre Royal; the self-contained staging cube serving to add ever more layers of symbolism to a thoroughly wrought script when placed within the larger space. Alice (Bethan Cullinane) and Fiona/Adrian’s (Lucy Jane Parkinson) Euro-kitsch flat is a pre-packaged box set depicting black and white photo feature wallpaper with pops of pink and blue, dotted with square shelving and empty frames. Ellan Parry’s design is right on the mark, playing with perspective and making countless allusions symbolising the journeys the characters are going through. Props (all drinks and lights) are nearly all active, ambient sound travels around the auditorium to place us directly in the story, the Apron is deployed sparingly to break the fourth wall, and colours deepen when Alice delves further into her escape from reality.

The script is a fresh mirror of our time, holding up intimate conversations and journeys happening now all over the world, with brutal honesty and tenderness. The recognisable dynamic between Alice’s martyr mentality and Adrian’s devoted vulnerability is complicated by the equally valid struggle of self-definition by Alice and the ugly growing pains of Adrian’s hormone treatment and frustrations at being framed by others’ expectations. Just when you think too much platform might be being given to this privileged cis white girl not making room for her partner’s identity, Alice delivers the devastating line, “Who the fuck are you to tell me I’m not?”, reminding us that no one gets a free pass on making assumptions about another’s core self. For all their communicative failings along the way, the characters reach towards redemption, forgiveness and acceptance in a hopeful ending that discards the Manic Pixie Dream Queen of Queer Narnia distraction and depressive lack of attachments that Alice’s diversion here implanted in their relationship.

The cast are outstanding. Elijah W Harris perfectly complements Parkinson’s Adrian as his supportive brother Josh, the lesser-seen Man Open To Learning, deftly presenting the role model for progression by privileged allies that we need on stage right now. Parkinson and Cullinane are endearing from the off in their perfectly pitched familiar banter, the former’s Adrian presenting with acutely observed physicality that puts his delicate, romantic soul on his sleeve, woven in with his performative, and pre-formative, masculinity. His breakdown upon being left by Alice, leaving him ready to completely box up the self he has worked so hard on releasing, is utterly heartbreaking. Ellie Morris plays the thankless, painfully identifiable catalyst role of the MPDG, quickly establishing herself as a predictable threat to Alice and Adrian’s relationship and the status quo. The romantic/sexual chemistry and fight execution leave something to be desired, which is somewhat in keeping with the heightened, flat-pack style of delivery for this story; you are never wholly immersed in emotional truths but rather they are exhibited from a level of remove like colourful puzzles to spend time dissecting later. A poignant, prescient situation running its course in a safe space. Simultaneous therapy for the queer masses, and education for the rest.