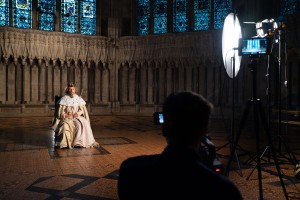 THE SACRED KING filming on location in York Minster, photograph by Ben Porter

Richard II and the city of York have a tumultuous history. The transient king gave the city its most significant royal charter, promoting it to the status of a county in its own right: ‘the county of the city of York’, among other fresh freedoms and privileges he bestowed upon the city. He created the title of Duke of York, first given to his uncle. How much the more tragic, then, that Richard should meet his end confined in a cell at Pontefract Castle, his death shrouded in mystery and dishonour by the neglect of the centuries since.

THE SACRED KING is a new short film featuring Shakespeare’s Richard II Act 5 Scene 5 soliloquy, filmed on location at the original heritage site of Pontefract Castle and performed by Mark Burghagen (BBC, Opera North, York Mystery Plays). Having been crowned at the age of 10, crushed the Peasant’s Revolt, feuded with his powerful uncles, been humiliated by his council and deposed by his own cousin, the former King Richard II finds himself imprisoned at Pontefract Castle. Having fallen from the heights of glorious majesty to the bottom of society, he comes to terms with his own humanity in this final speech of Shakespeare’s beautiful play.

The idea for the film was borne out of Burghagen’s titular role in Bronzehead Theatre’s production of Richard II, opening with a week-long run at York’s stunning hidden gem St. Martin-Cum-Gregory, moving on tour around Yorkshire and ending in a single performance at Pontefract Castle, gradually gaining larger audiences until they gave their climactic performance to around two-hundred people in the real summer-sunset garden of England. Burghagen felt that the sacred king needed to be captured, documented, seen by more people. Returning to the Bronzehead version in 2016 for a week’s tour in Germany for Shakespeare 400, the idea then steeped amid concentrated efforts until filming took place in early January 2019. Having known and worked with Director Yvonne Morley, a text and voice coach with over thirty-five years’ experience, for around twelve years, Burghagen saw her approach as the perfect fit for the project, owing to her love of the marriage between theatre and history, and her ability to maintain truthfulness in performance. The pair are most inspired by what a text does to a person, lending a fresh, subtle air to this filmic adaptation that also nods fondly at live showings, prepared but not overwrought. Together they demonstrate beautifully the notion that one’s ‘final’ (or most recent) performance of a text will not be the final understanding of it: theatre is a discourse, and a performance is a contribution.

This end-of-life prison speech is all the more moving for being embedded – for the first time ever – in the authentic space that the king himself would have been in, delivering a more intimate insight into the king’s thoughts than a stage performance would allow. Morley (RSC, Shakespeare’s Globe, Royal National Theatre) points out, echoing Hamlet, that “good acting is about holding the mirror up to nature, reflecting what real life looks and sounds like. And this [project] was an opportunity in a real prison cell to touch on that in much more detail and connect with it more than one could on a nicely lit stage.” Having been present for Bronzehead and Burghagen’s first incarnation, and recognising the tenderness and patience in the actor’s approach to the king’s final moments, one can see the appeal of documenting it on camera. Up close, Burghagen’s performance conveys even deeper a sense of weight and strength, Richard now a dwindling life enduring the weight of a world and still a fastidious study of life, thought, nature. His calm manner and rich poetry ironically indicates a detachment from his circumstances, and even in this, there is more poignant truth in Richard’s state of mind, addled by hunger, cold and isolation.

“then crushing penury
Persuades me I was better when a king;
Then am I king’d again”

While a rag-clad Richard huddling on a stone floor comprises the meat of the film, we flash back to moments of grandeur in his memory, the camera zooming slowly in on a richly-bedecked king (thanks to sumptuous costume by Laura Bourchier) in all his stately glory in the chambers of York Minster – we see all that he has lost, and yet Richard himself still stands proud in his faithful dedication to life and his role in it. With eyes like a storm-dulled sea and shaking hands, Burghagen’s performance carries us from hopeful pondering through pious sacrifice to devastated resolution that is not without some remnant of fondness, and his final gestures convey godly ceremony.

Morley states, “The visual journey through this piece – and the opportunity to go much further with the costume, the make-up, the positioning within location of an actor who is really going to be in a prison cell for an entire day in very real cold, damp, dirty conditions with a hard floor and all the rest of it to actually perform – gives us a little bit of insight of how someone has to live in these conditions for real.” (“The red nose is not painted on”, Burghagen assures us.) “The journey through the speech had much more meaning and much more resonance, and bringing the speech to the screen one had much more sense of the passing of time by putting it through a sequence of events rather than just one speech from beginning to end.” Certainly, the camera allows us closer to the heart of the moment, if not in the immediacy of a live performance then in a tangible closeness between the actor and the crew; the actor and the screen; the site and the text. There is a great sense of fidelity in watching THE SACRED KING – everyone working on the film is honouring a tremendous love and respect for the weighty history that steeps the piece in serious study, making it utterly captivating.

In addition to providing this unique perspective on the text, the short film will also make a wider audience aware of the fairly unknown connection between Shakespeare, Richard II and Pontefract Castle. Burghagen explains, “The castle’s grounds have undergone significant development and restoration in the last few years and have just been re-opened to the public. This means that the grounds, including areas that were previously off-limits to the public, are now accessible again after several years of extensive work. The team were also able to secure a few cutaway shots at York Minster, an opportunity for which we are very grateful.” Of course, the screening venue itself adds another layer of historical wealth to the film’s context. Named in 1378, (one year after Richard’s inauguration) it’s thought that Pavement was given it’s name as it was the first walkway to be paved in York out of all its medieval streets. Originally a central point of York and a hive of activity, Pavement was host to many markets, gatherings, announcements and punishments. Presiding over the street above what is now the York Gin shop, The Dogrose is the perfect venue in which to showcase the film.

Cinematography and editing by Ben Porter of Hewitt and Walker creates a pure, sensory presence in which Burghagen’s fragile king meditates and philosophises over time, the footage forming vignettes that fade into one another to form a steady montage, deepening the passage of time and complicating the safety of real-time performance found in theatre, where an acute awareness of the conceit is ever-present. The film has a chance to breathe and exist, undisturbed by its audience. Incredibly natural lighting, and make up by Lisa Pearson, perfectly complements the aesthetic tone – that of a Bosch painting brought carefully into slightly crisper focus. On closer inspection, Burghagen even sports Richard’s distinctive two-point beard. Light smacks of water drips adorn the film with fortunate accident, and opportunity is grasped in small acts like a bowl of water being scraped gently across the ground. The acoustics in the stone cell do jar somewhat, serving to bring the production from its cosy nest of contemplation out into the conscious awareness of the wider environment, somehow reminding us that this is a modern endeavour.

The film also features music by Shakespeare contemporary John Dowland which was specially performed by the two internationally renowned musicians, the tenor John Potter and lutenist Jacob Heringman. Dowland’s In Darkness Let Me Dwell is particularly haunting and cathartic in its effect. Rounding off the release with a presentation and Q&A hosted by Rosemary Alexander-Jones of Heritage Film Locations, Burghagen opens up questions to the audience, entailing compelling discussion on the potency of site-relevant theatre and its translation onto screen. Burghagen says of live theatre, “You build sand castles, and they collapse again after the bows.” Reviewing two comparative stills from the film illuminates even further enriching detail; Richard’s hands, once full with objects of purpose and status, now lie lost and empty in his lap, as if yearning to be useful again. Similarly, Burghagen’s sand castle awaits, but is now made of sturdier stuff – the film is available to watch online, and he hopes it will be seen as widely as possible, appear in festivals and have many more screenings.

Launched online on Valentine’s Day 2019 to mark the date of Richard II’s death, THE SACRED KING was presented in a world premiere screening at The Dogrose, York, on Sunday 19th May as part of York International Shakespeare Festival 2019.