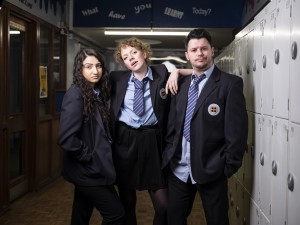 John Godber’s 1984 play Teechers may be old enough now to work as a teacher at Whitewall High School, but that doesn’t mean the themes of disenfranchisement and dossing about within an inner city, ‘rough’ school no longer ring true in 2019. Durham Gala Theatre (in co-production with York Theatre Royal) breathe life into the play with plenty of Northern charm and enthusiasm.

Godber’s play within a play sees Salty (Louis Roberts), Gail (Sarah Boulter) and Hobby (Mahsa Hammat Bahary) staging an homage to their outgoing drama teacher. From previously being regarded as lost causes, the ensemble creates a buzz of eagerness from the moment they enter the auditorium. Bahary’s cautious entrance flags that there’s still a tinge of uncertainty about the proceedings which reveals itself over the course of the show. These three have had to deal with unwanted advances, school bullies, and the overriding feeling that they won’t achieve much after their final week of school. You’d be nervous too, right?

There are a couple of curious instances in which the production’s added some up to date references which deliver mixed results. Whilst it’s fun to hear that the kids have staged their own version of Avengers: Age of Ultron (though this 2015 film reference in itself feels dated- let’s talk Endgame, people!), the follow-up that Gail and Hobby are so keen on E.T. feels out of place with fifteen year olds in the present day for whom the alien prosthetics probably look a bit naff.

Likewise, the sexual discourse in the play flies in Godber’s 80s but feels that it teeters on dangerous territory in 2019. The fact that Nixon’s fracas with school bully Oggy is particularly focussed on in depth means that Gail’s presence in her teacher’s car at night is evenly more discordantly swept under the carpet. Perhaps in a period piece this could be waved aside more easily but here it normalises the kind of age gap romanticism that’s (correctly) looked on less favourably by the day.

Tom Wright’s direction offers a wide range of physicality throughout the show- by showing the students in Jeff Nixon’s class go from slouching off the edge of the stage to nervously hovering around their teacher, Wright subtly shows the developing confidence in Nixon’s protagonist. Wright’s own connection with the play shows (his mother was a drama teacher) and there’s a lot of heart that’s clearly gone into the production.

Hannah Sibai’s school stage invokes that undeniable whiff of floor polish and sweat which comes hand in hand with assembly, and some effective touches may for impactful set pieces. However, the choice of moving set around between scenes quickly establishes that each of the rooms in the school (from staff room, to head’s office, to classroom) all look fairly interchangeable. Without the clear distinction between scenery the movement of whiteboards and chairs doesn’t create new spaces so much as stunts the natural flow of the play.

Whilst it may take a while to warm to the cast playing a bunch of teens, the show confidently comes into its own in the second act-almost. It feels like the cast is hindered by Godber’s script: Roberts gives a genuinely moving speech about Salty’s fear of squandered potential, a monologue that moves shakingly to expose all of Salty’s vulnerabilities. He’s laid bare, his headteacher looking on. The scene ends. That sense of unfulfillment feels ripe for both Salty and the audience.