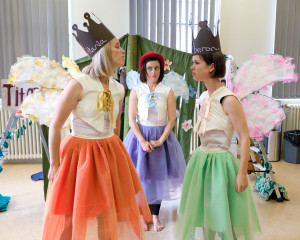 Warming the hearts of children and adults alike, Hoglets Theatre is back with a summer smash hit that brings all the magic of William Shakespeare to life for all the family. Just skimming the back end of the recent York International Shakespeare Festival 2019, this cheeky remix of A Midsummer Night’s Dream provides the perfect half-term entertainment.

A Midsummer Night’s Mischief opens on three dark-hooded figures looming ominously over coloured lights, reciting Macbeth’s witchy beginning before one of the trio breaks character and calls a halt to the proceedings. Cue an impish argument over which play it is that is supposed to take place, complete with sighs about how ‘Will’ never shows up on time – and probably won’t today, so what does it matter which play we do?

With perfect comic timing and a robust welcome, we are taken under the wings (shush) of Moth (Gemma Sharp), Mustardseed (Rachel Watkinson) and Peaseblossom (Lara Stafford). The adept trio of actor-mother-teachers move seamlessly between the rich poetry we know and love so well and pleasingly frequent, sharp breaks to make tongue-in-cheek comments on the action as they go. Engaging their young audience at well-timed intervals throughout, they manage to tell the story of Athens’ lovers, fairies and mechanicals in an accessible version without a hitch.

Witty lyrics by Sharp and Stafford fill a range of parody musical covers punctuating the punchy tale, such as Who is Willy Shakespeare? (better known as Don’t You Want Me Baby? by The Human League), in which Stafford’s deadpan robot is a particular delight. Team Titania and Team Oberon are quickly formed and chants are raised as the fairy war hots up. As always, Julia Smith’s uniquely crafted, colourful costumes add layers of other-worldliness to the surreal wood-bound happenings. Hand-crafted leaves and flowers adorn the enchanting set, hung between two ladders and emulating the kind of toy-box theatre everyone creates as a child, but on a ‘big person’ scale. The urge to play alongside them is great.

Purple gem-studded boxes aside (I’ll need the name of your supplier, fairies – my people will call your people), the youthful passion and care that has gone into making this show is also on display in the entrance of Bottom in his donkey guise. Designed and operated by company founder Sharp, here we find him as a warbler puppet evocative of some of Jim Henson’s more delicate, fantastical work. His rendition of I Will Survive (and do all the parts by myself because I’m Bottom and I’m extremely talented) is hilarious and even poignant, drawing out all the wonderful levels of feeling that can sometimes be missed in the character.

Willing volunteers find themselves cast as Helena, Hermia, Lysander and Demetrius, holding name placards to illustrate a song explaining their love square, for which Stafford provides appropriately spritely guitar for the increasingly manic Moth. And then another song explaining their love square with the added ingredient of Love In Idleness. (“It’s a pansy, Puck. Get me a pansy.”) Stafford’s Oberon and Quince are perfectly pitched in conjunction with Sharp’s Puck and Bottom, both dynamics rich with friendship, mischief and humour. Watkinson makes a grand, proud Titania, whose snores cause an eruption of chuckles among small observers.

A Midsummer Night’s Mischief is definitely managed, and Hoglets Theatre are a company that make really good decisions.

Get your tickets and follow the mischief at York Libraries this week, and online here.