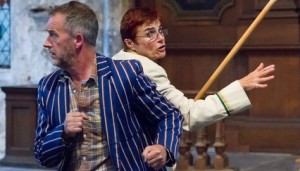 Director Tom Straszewski pays apt homage to the garden of England so worshipped in this underperformed historical play by decking out a fully committed site-sensitive performance with vines, flowers, ladders and live turf lining the aisle of his actors’ traverse stage.

The concept really sings, not only providing the cast with a rich, live environment to interact with but also immersing the audience in the nostalgic musk of British camping holidays – it was a wet night – evoking an apropos sense of longing for a happier past; the days before Richard’s realm began to rot.

Live music is provided by one-woman-band Stephanie Hill, and at one point a cappella by the entire cast, augmenting the driving motivations behind various powerful moments in the action. Lighting is also effectively, and sparingly, deployed: Richard’s lamp-lit musing in the darkness of his cell is incredibly intimate and commanding, and Bolingbroke’s closing speech, perched above green spotlights, is equally affecting. 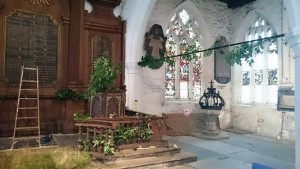 The styling of the set contributed greatly to the experience of the play. (Photo by Mike Oakes)

Mark Burghagen plays a cream-suited Richard, sharp-eyed and feline, while Amy Millns is a pumped-up, righteous Bolingbroke. They are accompanied by a multi-roling ensemble: Geraldine Bell (Duchess of York/Salisbury/Bushy/Hotspur), Mick Liversidge (John of Gaunt/Green/Northumberland), Richard Easterbrook (Duke of York/Mowbray) and Elizabeth Cook (Aumerle/Willoughby).

Burghagen’s performance is truly delectable. Poetic speeches are elucidated with humanity, making this unusual hero entirely relatable. He is captivated, and thus captivating, in every moment.

The exposed nature of the production feeds the essence of humanity that runs ripe through its veins. The cast tread tenderly through their live set, forming a tight-knit collective to execute stunts and fights right under the audience’s noses. Though there is a tendency to drop into caricature to differentiate between roles, poignant and stirring speeches are delivered by both Liversidge and Easterbrook, and one cannot help but will on every character toward their disparate destinies.

This is a measured, thoughtful, inspiring take on a story that one could be forgiven for forgetting is an old one. It is fresh, alive and exciting.