Handbagged: The Queen and the Iron Lady head-to-head 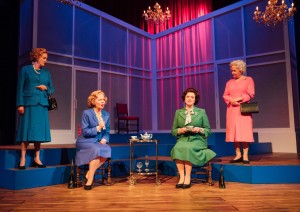 You know it’s a good play when you almost forget that you’re meant to be taking notes. And Handbagged is a very good play. By imagining what might have happened in the weekly meetings between the Queen and the Iron Lady, Moira Buffini has created a play that is engaging, funny, and best of all, great fun to watch.

Handbagged’s great strength comes from the duality of its main characters – there are two Queens, two Maggie Thatchers; a younger pair to act out what might have happened, and the elder ones to comment on it. The script mixes real speeches with speculated conversations, what might have been said behind the closed doors of Buckingham Palace, and asks the important questions – what did the Queen really make of Maggie’s policies? What cautions might have been offered and tossed aside? And where did Maggie get that accent?

It charts from the moment that Margaret Thatcher took power to the moment she left it – meanwhile, the Queen remains, waiting to welcome the next PM. The characters are unique and likeable somehow (older, War-Horse-loving, Woman’s Own reader Q, played by Susan Penhaligon, is downright loveable, charming in her sweet bluntness and her loving of winding up T). The younger Liz (Caroline Harker) is lovely, acid dripping from every well-bred syllable, whilst Alice Sawyer’s young Mags provides a delightfully patronising opposition. All four actresses played their parts beautifully, each bringing their own special touch to their character, whilst keeping a consistency with the other version of them onstage – not an easy feat – and played off each other well.

Part of what makes the play so unique is the two supporting characters, Actor 1 and Actor 2 (Jahvel Hall and Andy Secombe), who play between them parts such as Dennis Thatcher, Prince Phillip, Ronald and Nancy Reagan, a palace footman and various MPs. The multi-roling is slick and works brilliantly, the actors sometimes exiting as one character to re-enter a matter of seconds later as someone else. Where these two really elevate the play, though, is their acknowledgement that they’re in a play, and that sometimes the Queen and Thatcher (particularly Thatcher, the later years played by Sarah Crowden) try to skip over bits they don’t deem important, in an attempt to rewrite the bits of history they’d rather not remember. This meta element shouldn’t work, but the whole play is so quirky that it does – beautifully.

Directed by Jo Newman, Handbagged pulls no punches when it comes to Thatcher – her racism, distaste for the working class, and her hatred of socialism and the welfare state are all dissected onstage, with nowhere to hide from the effects her actions have had. At one point the Queen remarks, on the effect of one of Thatcher’s policies, “We lost the feeling that had persisted since the war – that we were all in this together”. In a country divided by Brexit, adrift in a storm, those words hit home.

Dawn Allsopp’s design provides subtle support for Buffini’s script. The set is simplistic, the costumes period-accurate, right down to Maggie’s iconic blue and blonde, and the music is low-key, more flourishes than themes, and yet Handbagged is a play that grabs you and won’t let you go. True, it borders on camp in some places, and the whole thing is whimsical, rather than hard-hitting political drama, but it’s because it’s not a heavy drama that it is so impactful – it makes it all human. And maybe that’s what we need right now; a little humanity, and a good dose of laughter.

The show runs until Saturday 11th May, tickets available here.