The Audit (or Iceland, a modern myth): They f***ing knew 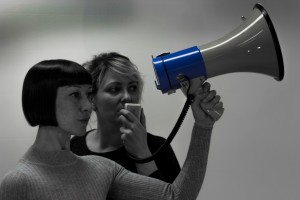 Gillian Lees and Rachel Baynton in The Audit

Written and directed by Andrew Westerside, The Audit defies the expected theatrical genres, utilising storytelling, spoken word and lecture styles to build a carefully structured exposé on the world’s banking bigwigs’ nefarious engineering and advantage of the past century’s economic crises. This is a TED talk with a kick.

Running straight through at sixty minutes, the show is made engaging by the lithe capability of the deviser-performers (Rachel Baynton and Gillian Lees), pleasingly considered digital design (Adam York Gregory), original sound and music (Paul J. Rogers) and slick technical support. The aesthetic contributions form a vital third cast member, evoking fiercely conscientious study of the narrative being presented, as well as the form of presentation itself.

The message is clear: “They f***ing knew.” (And we should have, too.) Like its allegorically-functioning Icelandic protesters, this show is out to get the men, and the system, that put us where we are; dependent, implicated and trapped. While there are moments of cheeky brevity (“Look! Here’s a picture of some rich white men!”), the decisive lack of remove from on-the-streets placard-wielding does run dry on occasion, and for anyone relieved by the seemingly verbatim confessions of money jargon ignorance towards the end, the same jargon will earlier alienate and leave you struggling to keep up as the cast deftly switch back and forth through historical events and concepts to weave their story.

There is also a (likely intentional) discomfort in the mixture of studious sombreness and sprightliness affected by the performers. This, coupled with the lack of anything particularly pinning April 2019 as especially, more than ever, The Time for this message to be heard, somewhat undoes the galvanising effect. The evening serves as an amusing, boggling socio-economic history lesson that ultimately leaves us adrift when it comes to how, and in which direction, one can or should “make the world move again”.

In the melée with the viscerally infuriating sensationalism of The Wolf of Wall Street and the new wave of accessible, mainstream practical economic self-schooling such as Bad With Money With Gaby Dunn, a piece like The Audit could easily be lost at sea.

The Audit (or Iceland, a modern myth) continues on tour to Bradford, Sheffield and Barnsley – tickets and further information here.