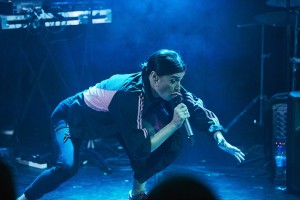 As the theatre door opens the group are testing their instruments, bantering like close friends. The audience is greeted warmly as they enter, creating the atmosphere of going to see a friend play at an open mic night.

Electrolyte tells the story of Jessie, a girl from Leeds leaning into a hedonistic lifestyle whilst suppressing intense grief and pain. We watch as Jessie’s mental health deteriorates, first slowly and then all at once into a raw dramatic crescendo.

The music swells and Olivia Sweeny’s Jessie opens with a fast-paced introduction of the characters, and the actors’ electric chemistry lights up their interactions. As each member of the group steps up for a solo, the others beam in pride seeing them take centre stage. Their on-stage friendships are instantly and wholly genuine. Although the entire cast brought an undeniable energy to the performance, Robyn Sinclair’s heart-stopping voice in the role of Allie Touch is haunting and elevating.

The application of music more generally is perfectly balanced, with more subtle sounds being applied during sections of rhythmic dialogue, building to full, loud, intense songs during the narrative’s most heightened moments. House, Jazz, Electronic and Drum and Bass are woven together in a rich tapestry of sound which drapes the theatre in the swags of a nightclub, a bedroom, or a crowded street.

Electrolyte succeeds in creating a narrative with a political purpose without feeling as though it’s ticking boxes or acting as an instructive show. Instead, the group brings a strong narrative to the stage, not only bringing mental health under the spotlight but also highlighting elements of mental illness which are still little discussed and hugely stigmatised in the UK today.

The show continues on a UK tour, tickets available here.