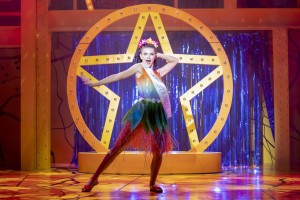 A musical adaptation is inevitably a big departure from the raw dramedy of the original Little Miss Sunshine, Michael Arndt’s touching film of 2006 that deals with grief, loss and self-love. Chasing away the ghosts in the corners of the Hoover family, James Lapine and William Finn’s (Book, Music & Lyrics, and Music & Lyrics, respectively) new version of the story shakes off the poignant nuance in favour of a camp showpiece that keeps you at arm’s length, but has the audience in uproarious laughter.

Akin to Tony Award Winner Fun Home, the music employs melodies that evade catchy, predictable patterns and sweep through a range of notes that really show off the cast’s abilities and complements the dysfunctional family tale – Lucy O’Byrne shines as Sheryl in the unusual Motel sequences, and carries the highlight number Something Better Better Happen beautifully. O’Byrne and Gabriel Vick (Richard) do a good imitation of the most captivating elements of Toni Collette and Greg Kinnear’s performances, getting inside the skin of these not-particularly-likeable characters and making them human. Mark Moraghan plays an unexpectedly rambunctious Grandpa. But the cynical family dynamic gravitates around the beam of light that is Olive (Evie Gibson); a tiny, adorable ball of energy, ambition and glitter who sends up the climactic Shake Your Badonkadonk with brilliantly innocent, cheeky charm.

While the cast are clearly capable, the decisions made by director Mehmet Ergen are questionable. The action hinges around the revolving set piece of the van, which is fine when it’s on the move but noticeably static when it’s not.

The real disappointment of this show is the humour – while evidently hitting its target audience, the constant jokes about the queer community are incredibly tiresome and do not carry well in 2019. Discarding Steve Carrell’s sensitive delivery of Uncle Frank, Paul Keating here portrays him as a jazz-hands fae-gay, not quite uplifted by an awkward dramatic song set in a gas station men’s room. The weight of his recent suicide attempt is palpably absent. While Paul Dano’s devout, stoic Dwayne invokes quite the wrench of the heart, Sev Keoshgerian plays him as a stereotypical apathetic teen, complete with dragging arms and drooping jaw. The side-eye rather loses its effect in the space of the auditorium. Richard’s warning to Olive about ice cream making you fat, and implication that only losers are fat, hits all the right notes in the original while here simply elicits schoolboy giggles. Don’t come expecting the tender respect shown in the making of the film.

That said, the show is undoubtedly an entertaining outing for all the family, and at least broaches difficult topics that aren’t necessarily addressed elsewhere. The Hoovers remain an interesting, complicated case study in navigating life, failure and disillusionment as a family. And Imelda Warren-Green’s appearances as Linda and Miss California are not to be missed.