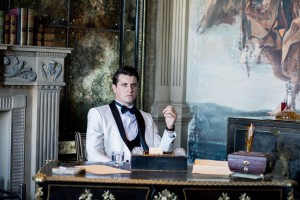 The Great Gatsby returns to York, photo by Charlotte Graham

Greeted warmly with York gin and tonic and Long Island hospitality, stepping over the threshold of the John Cooper Studio take you right into F. Scott Fitzgerald’s classic novel brought to life. Enigmatic suits and skirts of the American twenties beckon you around the building, now transformed into bars, dance halls, lounges and boudoirs. No corner is untouched, no guest unattended.

“The honour would be entirely mine if you would attend my little party.”

Directed by Al Wright, The Guild of Misrule return home to York for Christmas with their West End hit, London’s longest-running immersive production, The Great Gatsby. This party is anything but little. From the fragile, starry-eyed Daisy Buchanan (Amie Burns-Walker) to her exuberantly charming rat husband Tom (Toby Gordon), these are Fitzgerald’s New York sweethearts brought stunningly to life and walking among us. Conservative anthropologist and master storyteller Nick Carraway (Hugh Stubbins) bookends the narrative with rich original prose, and the full commanding ensemble guide you through happenings enriching the story with dance, passion and mischief.

Stolen moments of breathy conspiracy slip seamlessly into magnetic scenes of grand, filmic romance, captivating each person in the room in their own bespoke experience. The enigmatic lust and longing between the obviously flawed tryptic of lovers dissolves any sense of distaste for their misgivings and breathes new light into the most delicate of human desires.

Engaging the audience in each and every minute, this grand interactive party is a cocktail of the highest pleasures of live performance and further evidence of the company’s innate talent for hosting and enchanting. Its one crest-fall is the possibility to get stuck in one thread of the story; after multiple scenes with the Wilsons, charming though they are, you can feel like you’re missing the real action. That said, the near-flung but restless veins of it are impeccably orchestrated. So don’t wait around – keep your eyes open, follow the sneaky footsteps and take the story you’re hungry for. You’ll go home aching to be invited back.