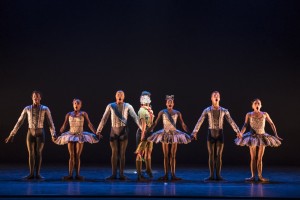 Ballet Black in A Dream Within a Midsummer Night’s Dream

Led by Artistic Director Cassa Pancho, Ballet Black celebrates dancers of Black and Asian descent. Cathy Marston’s 2018 narrative piece is based on the 1963 short story The Suit by South African writer Can Themba. Originally published in the inaugural issue of South African literary journal The Classic, the story was banned by the apartheid regime. Though that setting is somewhat lost here without follow-up reading, the emotional truth of the characters’ experience sings through this delicate re-telling that honours both the tragedy of toxic jealousy and the breathless lightness of finding oneself welcomed unconditionally in another’s arms.

Choreographer Cathy Marston, Lighting Designer David Plater and composer Philip Feeney create a pulsing, skipping version of the affair, embellished with concise deployment of the ensemble. The piece opens to a chorus of succubi throbbing back and forth from the couple’s bed, spotlit in a stifling entanglement evocative of the stress-induced sleep paralysis symptoms portrayed so hauntingly in Fuseli’s The Nightmare.

Compulsive motifs such as the continual wiping of feet, and dabbing arms slicing through light reminiscent of corn fields at dawn, build on the oppressive disquietude in foreshadowing the indirect violence of the marriage and its fatal guilt-driven consequences. The wife’s playful time-killing juxtaposed with the sharp movements of the dancers and of Feeney’s frowning, hiccuping score serve to heighten the suspense as the lover is invited in and enveloped into a bedsheet toga before they fully unravel each other. Marston’s choreogaphy showcases both soaring and dripping, sap-like movements of the body, imitating the sotto voces and crescendos of intercourse while, elsewhere, the husband encounters a whimsical parade of commedia dell’arte style characters on his commute.

Time slows to syrup for the lovers and a clock chimes backwards as they are caught in the act. Now reversing their power roles, the wife becomes defined by a wretched state of nausea, commanded to drag the burden of the suit everywhere as an emblem of her shame until she commits suicide under the weight of her guilt and her husband’s punishment.

If The Suit could be taglined, “The straights are not okay”, then its successor settles the matter that, “The gays are very much okay.” Director-Choreographer Arthur Pita’s A Dream Within a Midsummer Night’s Dream is possibly the most authentic, concentrated adaptation of Shakespeare’s most beloved fairy-drug-riddled romantic comedy in its profound sense of mischief, colour and queer exploration. A stiff traditional ball claims the young hopefuls of the court of Athens until Lost-Boy-Scout Puck appears, looking like Rufio from Hook did a sneaky post-coital outfit swap with Robin Williams’ Peter Pan.

“Hypnotised by a strange delight”

The engineer of chaos spells the lovers into a sleep-drunk baby ballet, trotting them around in a dressage display of sighing and fanning like flamingos on parade. Awaking to swamp noises in tall purple grasses, the dancers stretch out their awkward limbs knees-and-hips first, crawling like bugs with the fairies before inhaling Puck’s glitter explosions and embarking on wild, fluttering dances, men like bullfrogs surrounding the tittering female lovers and being batted away from their self-sufficient bubble.

While the human women in lust are cute and feisty, the magical forest royalty become embroiled in much more sweet and heady encounters. Titania nurtures Bottom through a transition more obviously painful and disorienting than in any other production, finding ways for their bodies to work with and support each other outside of mainstream expectations that his new form is marginalised from.

Jeff Buckley’s recording of Lilac Wine, anthem of intoxication, frames an incredibly moving, tender dance between Oberon and another male dancer. Subtle rushes of anticipation break like waves as the mystery lover appears behind a sheet held up by Puck and stolen into the scene to form a blind running flame, to which Oberon is a moth. The surreal frolics eventually relinquish the twilight back to the ballroom, but not before Salvador Dali taps his way across the scene to give the madness his blessing like a Lynchian officiant. Yes, really.

Perhaps most importantly, this version of Puck’s manipulation, which is in its original context akin to revenge date rape, does pause for a breath to highlight the horror on a victim’s face before full submersion beneath the drugs, and also gives at least one character the choice to partake in the game or not, which she does willingly. Not often enough is the question of consent considered in a fresh, constructive way when adapting such problematic classics. As we watch the relevant law shift uncomfortably under the pressure for this discourse to finally find its voice, it is refreshing (and vital) for the arts to be making these nudges. The darker implications are negated somewhat here by the appearance of the characters finding something of their true, innermost feelings in this breakdown of inhibitions, and of the level of remove from reality we are encouraged to imagine in the ambiguity.

Read more about the company and the pieces, and watch trailers, here.