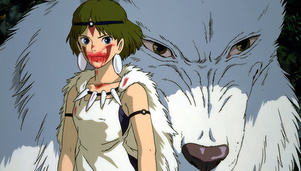 Princess Mononoke made our top 5 but where did it come in?

Studio Ghibli is renowned worldwide for its stunning animation and innovations in storytelling. Luckily, City Screen is running a season of Studio Ghibli over the summer.

In our excitement, we decided to pick out our top 5 films from the studio, all of which turned out to be directed by Hayao Miyazaki. Here’s our favourites and why we like them best.

This is possibly the cutest and certainly most merchandisable of Studio Ghibli’s films. My Neighbour Totoro is set in rural Japan, where two young girls, Satsuki and Mei, meet mythical woodland creatures, from the cuddly Totoro to the Cat Bus. The mythology of this film is more intriguing and unusual than most children’s fantasy films and has sparked various fan theories about what the characters are supposed to represent. Overall, it is one of the studio’s lightest films and a good one to start off with.

4. Laputa: Castle in the Sky

As its first feature film, Castle in the Sky was an excellent demonstration of how dramatic, heartwrenching and even fun Studio Ghibli could be. The young heroes Sheeta and Pazu battle pirates and more in their quest to find the legendary floating castle. They are endearing and relatable characters whose innocence of challenged through various events. Although the film has comedic moments, it is also saddening to see the fate of Laputa.

For many Westerners, Spirited Away might have been their first foray into Studio Ghibli as it won an Academy Award for Best Animated Feature in 2003. A well-deserved award for this coming-of-age film. It is about a girl named Chihiro who has everything she has ever known taken away from her when she enters the realm of spirits. The film enchants with its mythology and tugs at the heartstrings as Chihiro learns about love and loss.

On the surface, Princess Mononoke can be enjoyed as a regular fantasy-adventure film but closer attention to the story raises questions about whether or not opposing sides of a conflict are inherently good or bad. Ashitaka sits at the centre of the story as he seeks to rid himself of a curse caused by the battles between the creatures of a forest and the humans of its neighbouring Iron Town. The film endears you to the innocent spirits of the forest, terrifies you as creatures turn into demons when consumed by hate and saddens you as all the characters learn about the loss that comes from fighting.

All of Studio Ghibli’s films are pretty, so it’s not to be taken lightly when we call Howl’s Moving Castle the studio’s most beautiful film. This film also slightly defies its own storytelling conventions by putting a 90-year-old woman in the lead role. However, Sophie, the lead, is actually a young girl who has been cursed by a jealous witch. She sets out to break her own curse, the fire demon Calcifer’s curse and to help the vain Howl get his heart back. The film explores comedy, romance and a range of elements of the human condition. Plus, it has a strong steampunk theme.

One Response to Top 5 Studio Ghibli films showing in York