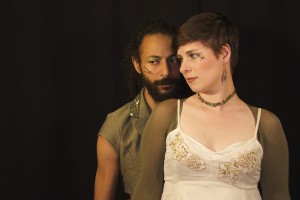 Their music has already gained traction through numerous radio plays, performances in front of huge audiences at York’s Little Festival of Live Music and playing sell-out shows with Vesper Walk.

Flora Greysteel is made up of Emily Rowan, who is in charge of vocals, piano and looping, and Simon Bolley on percussion.

Speaking about their music, Simon said: “Emily and I are often asked what genre of music we come under and because we are influenced by so many we can’t actually answer the question. So what I tend to say is that we perform elements of cabaret rip-roaring choruses twinned with choral elegance as well as moments of sea shanties and electronic pop.”

Their EP has already received positive feedback from some people, including York’s Little Live Music Festival organiser Ellen Cole. She said: “I love how hypnotic, surreal and different each song is from one another. Flora Greysteel should be really proud of what they have created and I would urge anyone who hasn’t seen their work to go down to their EP launch evening, I have a feeling it is going to be a memorable night.”

On the night of their EP launch, Flora Greysteel will be supported by anti-folk songwriter Chris Mather and folk six-piece The Bramble Napskins.