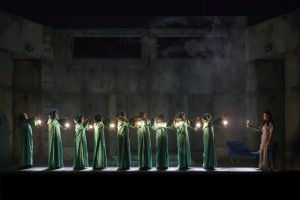 The Witches with Lady Macbeth, Photo by Richard Hubert Smith

Firstly, I write this review from a theatrical perspective and background, not an operatic one. A lover of Shakespeare and Macbeth, but a novice to this art form; I don’t know my aria from my elbow but I can tell drama when I see it (or hear it) and the English Touring Opera’s version of Verdi’s Macbeth (first performed in Italian in 1847) has it in bucketloads.

Verdi wrote of the story; “this tragedy is one of the greatest creations of man”. Already Shakespeare’s shortest play, the opera streamlines it further to rid it of anything superfluous (the killing of Macduff’s family is told to us by captions, Duncan is introduced but doesn’t sing), and to put the collapse of Scotland and the psychological undoing of the Macbeths’ minds at the forefront.

What is most striking to a lover of Shakespeare’s play is how Verdi has elevated the relationship of the Macbeths. Far from only spurring her husband on to the first act of murder and stepping into the background until the infamous hand-washing scene, here Lady Macbeth (a stunning Madeleine Pierard) also becomes implicit in the plots to take down Banquo and Macduff. This leads to three duet scenes, the first of which occurs immediately following Macbeth’s slaying of King Duncan. Far from the hush whisperings of the play, their song elevates this moment to one of a disturbed ecstasy, where the couple’s voices begin as complementary and conspiratorial before showing the first signs of discord as they overlap and act on their own impulses and thoughts.

Aside from the Macbeths, the third ‘character’ that Verdi identified as core to the drama, was the witches. Here, they are a ten strong chorus dressed in turquoise nurse/nun-like costumes by designer Frankie Bradshaw. The effect is not one that is particularly spooky or discomforting, but when they face the audience and sing we feel as if we are being drawn into their plots. The decision for them to deliver Macbeth’s discarded letter to his wife at the beginning was inspired, but they later settled disappointingly back into their roles as conduits for the plot. The directorial conundrum of the weird sisters continues into opera it seems.

A dystopian set and quasi-contemporary costume further aid to divert us from the inconsequential and put the spotlight on the disintegration of a couple’s relationship and the tragic downfall of the well-loved Scotland of Malcolm and Macduff, who emerge as the only victors.

Read more about ETO and follow Macbeth on tour here.