Lost In A Sea of Glass and Tin: Lynchian dissonance 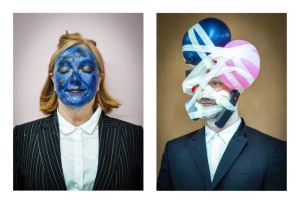 Lost In A Sea of Glass and Tin

Lost in A Sea of Glass and Tin is an intermedial performance devised by creative duo Gary and Claire, aka Gary Winters and Claire Hind, during a residency at Chicago Defibrillator Gallery and performed as part of York Literature Festival at York Theatre Royal Studio. Utterly incomprehensible, yet ultimately endearing, the show is inspired by David Lynch’s unsettling and noireesque imagination and Laurence Sterne’s Tristram Shandy.

There is certainly no doubt that trying to make sense of every single scene of this show is a titanic task and would probably plunge whoever attempted into a sea of glass, tin and frustration. In other words, abandon all hope of deciphering it, ye who enter. Try, instead, as a preliminary measure, to turn your mind into a blank page, as this concept is also fundamental to Gary and Claire’s practice. As stated in the programme, a blank page or a black screen can lead to seeing or understanding things that one could never expect. It’s all about how one receives the void and the absence of meaning in situations where meaning is normally expected to exist.

This philosophy seems to inform the beginning of the show, which is actually the opposite of the beginning. The audience enter to see Gary and Claire potter about on stage, in front of a white screen, adjusting the various props (boxes, neon cellotape, a chair) and checking the sound equipment (microphone, computer). Once the audience has sat down, a message materializes on the white screen: it reads We will begin in six minutes. This immediately generates a disoriented laugh, as Gary and Claire awkwardly try to kill time, fixing their own looks, wandering about with no purpose. The audience realises that there is no reason for them to begin in six minutes: there is nothing left to prepare, everything is ready, the show has already begun.

As time becomes redundant, there is plenty of time to focus on the performers’ fidgety bodies, as well as their striking costumes: Claire boasts a beautiful blue ballgown and her face is painted blue, while Gary wears a striking lily-white suit. This is an interesting moment that immediately compromises the unspoken expectations that surround performance: if the show has begun, why is nothing happening?

Once the six minutes pass, Gary and Claire activate a series of projections that accompany them throughout the whole show: everyday images of people walking in a park alternate with several images of blade fans and windmills. A menacing, electronic sound fills the space. The world the duo creates has a structure of its own in which the audience settles, aided by the rhythmic, absurd and mechanized pattern of actions that unfold in front of them.

Periodically, Claire launches in detailed, hilarious monologues about the state of a phantasmal ‘house’ that she is soon going to have to leave. ‘Everything is fine’, she comforts the non-existent person who is supposedly going to move in, ‘and when you see the milkman, will you tell him I think he’s fantastic?’ These monologues are interrupted by several ‘digressions’, in which Gary sings popular tunes such as Neil Diamond’s ‘Sweet Caroline’ after having taped paper cups and balloons to his head, while Claire proceeds to spin the chair on its hind legs.

The show cherishes dissonant juxtapositions of images and sounds which are bound to create a feeling of eerie incongruity in the beholders. This, at least, is a detectable Lynchian influence, as is Claire’s chillingly out of tune rendition of Angelo Badalamenti’s Twin Peaks soundtrack on the keyboard, which functions as a background for Gary’s monologue about ‘finding oneself in the dark woods.’ Yet, the show hardly presents itself as a tribute to Lynch, tapping in and out of eeriness to suddenly become puzzlingly entertaining and, at times, downright silly. In other words, it actively rejects any clear articulation of its own meaning. Functioning like a piece of performance art, it entrusts the audience with the ability and willingness to produce meaning without expecting it to be handed to them, which can and does feel alienating at times.

Should any audience member have given in to these feelings of alienation or have simply fallen asleep, the ending certainly has the power to resurrect them. Wrapped in two giant alien/bear-like costumes made of brown blankets to which sticks have been attached (possibly to signify antennae?), Gary and Claire lead the audience out of the theatre and into the streets, producing noises through a horn, to the puzzlement of the passers-by. This is crazy and hilariously funny, and there is nothing more endearing than seeing them re-emerge from their strange cocoons to bid the audience goodnight, as if it is, and has been, just a perfectly normal night.

Read more about Gary and Claire and their upcoming projects here.