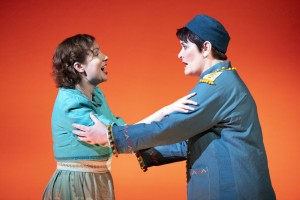 I can think of no better way to put Brexit woes behind you than to spend a night watching one of Mozart’s lesser performed (in York, anyway) operas, Idomeneo: the tale of a hapless leader, who makes a rash promise, and then spends the best part of three acts trying to deliver on that promise.

Ilia (Galina Averina), the daughter of defeated King Priam of Troy is imprisoned on Crete, and despite her better judgement has fallen in love with Idamente (Catherine Carby), son of the King of Crete, Idomeneo (Christopher Turner). As a gesture of goodwill, Idamente, who has fallen for Ilia, frees the Trojan prisoners, the news of which enrages Elletra (Paula Sides), the daughter of Agamemnon, who has also fallen in love with Idamente.

Meanwhile Idomeneo is thought to have been lost at sea following a ten year absence, but in a moment of peril has struck a deal with the sea god, Poseidon: for his safe passage he will sacrifice the life of the first person he sees when he strikes land. And, who does he first meet? Obviously, his only child, Idamente. You could say that from here on, things get a little complicated.

The four leads, along with John-Colyn Gyeantey as Arbace, Idomeneo’s confidante and High Priest were all on fine voice. As often with opera, there is trade off between the singing voice and the acting chops, and here some of the acting was a little less than convincing. However, Paula Sides’ Elettra was a notable exception, and was simply stunning in her final Aria, “D’Oreste, d’Ajace ho in seno i tormenti” (“I feel Orestes’s and Ajax’s torments in my heart”).

Some of the design and directorial choices lessened the impact of the performance, with many static scenes seeming somewhat stilted, and with the chorus often performing behind a low wall or from behind sliding partitions, both of which were alienating for the audience. The single set further confounded any sense of place and diminished any understanding of the plot for those in the audience not familiar with this work.

Conductor Jonathan Peter Kenny was in expert control of his orchestra, tightly squeezed into York Theatre Royal’s small and seldom used orchestra pit, who bought a much appreciated lightness of touch to Mozart’s exquisite score.

Read more about ETO and follow Idomeneo on tour here.