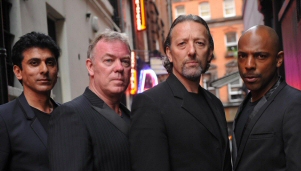 John Godber’s satirical play on the boozy night time culture of Britain is coming to the York Theatre Royal this September.

The play follows four bouncers, Ralph, Les, Judd and Lucky Eric, who have to watch as the many binge drinkers stumble across town on their nights out. Meanwhile, four women are on a girls night and four ‘lads’ are out on the pull.

This version will be directed by the Yorkshire born and bred director John Godber himself with Watershed Productions. The four bouncers are played by Ace Bhatti, Don Gilet, Ian Reddington, and William Ilkley.

As well as their TV stardom, these actors are also big names on the stage. Don Gilet played Orlando in the National Theatre’s production of As You Like It and Ian Reddington has just finished touring We Will Rock You. As well as his performances on the West End and in Edinburgh, William Ilkley has worked alongside John Godber since 1988 and has starred in Bouncers before.

This won’t be the first time that Bouncers has been toYork either. Some may remember the 2007 production featuring Andy Hockley, Matthew Rixon, Davood Ghadami and Nick Figgis. Those that do, will particularly remember their over the top flamboyant mannerisms as the girls.

With John Godber directing this version, which is touring nationally, audiences will get the original playwright’s true vision on the stage.

Elizabeth Jones, of Watershed Productions, said “John Godber has revisited the script and revised quite a bit of it to bring it more up to date – although, as he says, going out, having fun, finding someone to have fun with – those things don’t change!”

She also said about the cast, “quite often, in the past, John has directed the show with actors who have done it before. This time, all but one of them are brand new to the play, which is exciting. And because three of them are well-known faces from popular soaps, they’ll also bring into the theatre people who maybe don’t go to the theatre regularly. And Bouncers is a great show for people who don’t often go to the theatre.”

On starting the tour in York, she said “when you’re touring, it’s always important to open a show in a theatre which has a good production team, to help with any last minute technical hitches. But also, we know that John Godber’s plays are always popular in Yorkshire so it’s great to visit as many Yorkshire theatres as possible.”

Bouncers is showing from September 5 to 8. To book tickets visit the York Theatre Royal website.

One Response to Bouncers at York Theatre Royal