The Turk: Final moments with an automaton 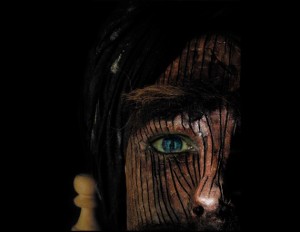 The Turk was a popular touring attraction of the late eighteenth century, until its destruction in 1854; an automaton fashioned in the garb of a mysterious Turk that challenged people to games of chess, winning the vast majority of them. Older readers may remember it being discussed on the children’s TV programme How, and it more recently was discussed on an episode of QI (in the H series, but identifying the episode title would be a huge spoiler).

It’s a fascinating tale, and one that clearly enthralls writer and performer Michael Sabbton. However, despite one or two clever ideas, the show never really captivates the audience. As we enter York Theatre Royal Studio we are met with a suitably atmospheric soundscape; the sea, the creaking of heavy ropes, the mewing of gulls – and we are clearly in the bowels of the merchant ship, Otis.

Simply but effectively realised, the set adds to the nautical aura: five locked crates upon one of which sits the carved wooden head of The Turk; a single hanging lamp with a filigree decoration; a case-worth of wine bottles, mostly empty, are strewn around the cabin, along with a miscellany of items including travel bags, chess pieces, ear trumpets and other ephemera.

Recumbent among them lies The Turk’s second owner, Johann Mäelzel (a heavily bewhiskered Sabbaton), a sail cloth covering his head, drunk and deranged after being quarantined in his cabin for six days, sick with Yellow Fever, heartbroken with grief after the death of someone only referred to as ‘William’. The play alludes to a father/son relationship, but the truth (which isn’t explicitly revealed here) is far stranger.

Sabbaton’s decision to focus on the last days of Mäelzel’s life hampers the theatricality of the evening, with large chunks of the tale being recounted through a one-sided conversation with The Turk’s head. This is compounded by the lack of clarity and focus, a consequence of all that wine and the fever-induced delirium, the depths of which only finally become effectively demonstrable in the second act, when the head takes on a life of its own.

There are well worn, but pertinent, parallels to be drawn between life and the game of chess – on the nature of showmanship and cunning that come pretty close to charlatanism – but the charisma that Mäelzel clearly must have had never really shows. There are a number of songs scattered throughout the evening that serve to drive the story forward with a little more pace and bring some much needed lightness to the evening, which at just short of two hours might benefit from some trimming.

Sabbaton is clearly a charismatic and accomplished actor, with an evident passion for the work he chooses to adapt and perform (he is highly regarded for some fine stage versions of H.P. Lovecraft tales), and perhaps by trying to maintain the enigma of this true-life story it will only register with those unfamiliar with the solution to how the animatronic Turk worked its magic.

Read more about the show and creator here.