The Remains of the Day: Save it for a rainy day 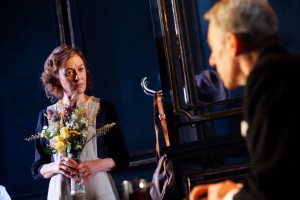 Niamh Cusack and Stephen Boxer in The Remains of the Day, Photo by Iona Firouzabadi

This week saw York Theatre Royal hosting the stage adaptation of The Remains of the Day, based on the award-winning novel by Kazuo Ishiguro and perhaps better known for the 1993 Merchant Ivory film starring Anthony Hopkins and Emma Thompson. A tough gig, perhaps especially considering that adaptations should appeal both to the ardent fan and the uninitiated.

Maybe it’s the fact that it follows hot on the heels of Emma Rice’s intensely theatrical Wise Children, or that it just isn’t exciting fodder for adaptation but despite director Christopher Haydon’s best efforts, The Remains of the Day seems to sit rather awkwardly as a play in a proscenium arch theatre, and despite moments of interest is rather uninspiring as a whole.

This is the story of Mr Stevens (Stephen Boxer), faithful and earnest butler of Darlington Hall, and is largely told in flash-backs between 1930 and 1950. Designer Lily Arnold (whose craft you may remember from The Secret Garden at York Theatre Royal last year) and team help to enable this through the use of a three-panel structure that slides across the stage in tiers to create the illusion of time passing, but also aid in creating background tableaux that assist in pulling together the threads of past and present.

Adapter Barney Norris is a good writer (and indeed brought the tale to the stage in collaboration with Ishiguro himself) and finds a way to affect this constant move between the times, making full effect of the small cast’s ability to switch between characters. However, other parts of the narrative are uneventful tales of misplaced ornaments and empty gas-tanks that appear as rather expositional vignettes without a common purpose.

Clearly what is supposed to hold all this together is the simmering unrequited love story between Stevens and housekeeper Miss Kenton (Niamh Cusak) but this is played all too safe (read non-existent) so that the denouement only manages a small spark. With more subtle chemistry built into the first half, the café scene has potential to be truly affecting. As it is, the mood of futility, reflected in the pathetic fallacy of the constant rain in Arnold’s panels and which is clearly a takeaway from Stevens’ life of service, is so pervasive as to be draining.

The only touch of light is to be found in Cusak’s Kenton, who brings a sense of buoyancy and forthrightness. Edward Franklin, too, pleases as the naïve Reginald. But you’re left wondering just what the medium of theatre is truly bringing to this tale of memory and regret.

This is an Out of Joint and Royal & Derngate, Northampton co-production in association with Oxford Playhouse. The show continues on its UK tour; dates and further information available here.