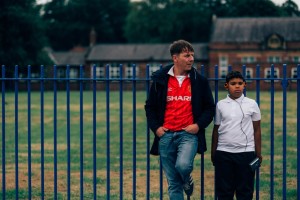 It is with these words that David Judge begins SparkPlug, his semi-autobiographical account of growing up as a mixed-race child in the eighties and nineties. For the most part, he plays his father (also called Dave), examining  his own childhood through the eyes of a white man, married to a white woman, who is giving birth to a child fathered by a black man.

Directed by Hannah Tyrrell-Pinder, the play focuses on the distinction between a dad – the man who fathers the child – and a Dad (with a capital D), who raises and nurtures the child, who gives him every bit of love he has. These roles don’t have to be fulfilled by the same person, and the portrayal of Dave, a charming lad from Manchester, who adores his son more than anything despite the curious looks and the too-personal questions from strangers, proves that. Judge gives a passionate and well-rounded performance, not only as Dave but as his mother, his grandmother, the neighbours and his younger self. This multi-roling can sometimes be a little confusing, but for the most part is handled well.

Katie Scott’s set is brilliantly put together – looking like a thousand garages across the country, with cardboard boxes piled high and left tantalisingly half-open, it makes you want to rummage, uncover the old toys and family history surely hidden away inside. The centrepiece, a life-size frame of a car, is unlike anything I’ve seen before, and the way it is morphed into different vehicles as time passes – pulled, pushed, new number plates and headlights added – is wonderful. Judge uses it to great effect, climbing in it, on it, turning it into a stage, a bed, a bike, as well as the many cars he loves and drives over the course of the play. Richard Owen’s lighting is also lovely, and Chris James’s music design – classic Rod Stewart, Paul Simon, and a bit of Michael Jackson – helps cement the time period.

The script, also written by Judge, is good, veering between narration and spoken-word poetry and back again, over and over, but it never feels forced. It all feels real – which it is, of course. SparkPlug is a unique play, but it is not the storyline as such that makes it so; it is the perspective. And that alone makes it well worth seeing.