The Secret Garden: A Love Song To Nature 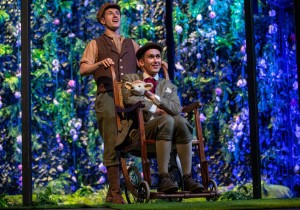 Bare winter branches stand guard in front of a huge mirrored prism cutting into centre-stage with a bold but cold-shoulder presence as large as the auditorium, echoing Mr Craven’s hunched back; the manifestation of his burden of grief. A protective freeze stills the house like Maleficent’s forest of thorns, and young life is encroaching, demanding growth and freedom. A vintage sheen of rust and silver make the space sparkle before lanterns thaw the world to an Indian summer, where Mary’s (Ella Dunlop) universe is all colour, music and dancing. At least, it would be, if only she were allowed even to be seen at her parents’ lavish parties.

Swapping the slow and complex grief of cholera for the tumult of an earthquake, Jessica Swale’s (Blue Stockings, Nell Gwyn) adaptation of this beloved children’s classic presents Mary the weed; an elfin-faced orphan who is underestimated and ignored but privately determined, tenacious, a survivor. Her self-preservation is her most ingrained trait from the start, when she forsakes her righteous belief in justice in a vain attempt to save her relationship with her mother. Manhandled into her new Northern English life, Mary trades her fresh white dress for stiff black everything, locking herself off from those around her and resigned to a life without vibrancy. It takes another ‘weed’, another child whose situation was never planned, to show Mary that she can be a breath of fresh air in this house of shutters and secrets. Alongside her estranged cousin Colin (Steven Roberts), Mary is nursed back to full bloom by housemaid Martha (Coral Sinclair), Dickon (Matthew Durkan) and gardener Ben Weatherstaff (Keith Bartlett), all of whom share an innate passion for life and nature. Around them, the fragility of human life presses, in the memory of Mrs Craven, Mary’s parents, Mr Craven’s ailments and Colin himself being bed-bound with no explanation. These are lives that soldier on as the lives they know are cut down.

“She made herself stronger by fighting with the wind”

Ephemeral songs trickle through the more magical moments of discovery and joy, Indian and English music intertwining in an exquisite composition by Barnaby Race. Peter O’Rourke’s raggedy fabric fauna skip and flit through the undergrowth; tentative observers reaching out to be graced by their delicate handshake. Above the peace of the grounds, Mary’s gradual induction into the household is interrupted by flashes of a tormented, wailing invalid, in scenes quite perturbing for the younger in the audience and quite unlike the Colin we meet later, illustrating just how nightmares can become our favourite dreams when we turn and face them. As the gates of the Secret Garden are unlocked, so is the full glory of Lily Arnold’s set, truly a sight for the sore eyes of Colin and his father.

You might like this if you liked The Little Princess by Burnett, or Theatre by the Lake’s previous production of Little Mermaid.