The Last Ship: You are what you do 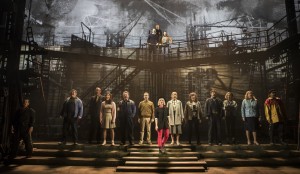 A musical about ship building might not seem the obvious choice to rouse the spirit and feed the soul but writer-composer Sting and director Lorne Campbell have created a show with an abundance of spirit, a tonne of soul, and bucket-loads of northern grit.

Set in Wallsend – “the place where it happened, or could have, or might still” – this is a story rooted in the shipyard in the 1980s but zooming out on that universal dichotomy of wanting to make roots at home and wanting to be free; of being grateful for what you have yet aspiring for more, and the confines in which one can do that.

Iron in the soul

What’s beautiful in this story is that although there are all the common features of a good yarn – the will-they-won’t-they romance, the rebellious teenagers, the obstacles the workers must overcome – the strength really is with the people. This is a tale about “unstoppable people in an unreasonable world”; fighting against the odds for a cause they believe in, whether that’s home or away. The ship yard workers are on strike. Their ship, aptly or else ironically named Utopia, will not sail. Ships can be built much cheaper oversees now, you see, as we are told by a Thatcher-like politician. Meanwhile, the young are longing for their own kind of utopia away from all they know in Tyneside, much like Sting when he left Wallsend to seek his fortune. Others have realised a life away from the North canna live up to expectations. (Well we all know that, don’t we?)

Are we not beautiful?

The songs are rousing and at their best in the chorus numbers – the refrain of “we got nowt else” ringing in your ears as you leave. For the solos, Frances McNamee in particular raises the rafters. There’s something comforting and honest and raw about these hardworking, no-nonsense Geordies bursting into song about the things that they love – whether that be their homeland, their ships, or their significant other.

The wind in the show’s sails is the set design and projections by 59 Productions. Rumour has it we weren’t even privy to the full extent of this as the show was delayed due to technical difficulties. If they aren’t the future of set design, then certainly touring theatre.

Jump on board The Last Ship at its final port tonight in Salford.