An Inspector Calls: Do socialists dream of electric bombs? 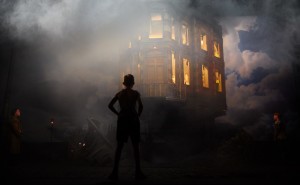 Blitz sirens and torches usher the buzzing anticipation surrounding J. B. Priestley’s widely-studied classic thriller into focus on a small boy searching for a hiding place. From playing friends, or coming bombs, he tugs at soupy red velvet curtains and sneaks between the folds.

Duality reigns in Director Stephen Daldry’s reprise of his 1992 National Theatre revival hit dense with muck and grandeur, birthed three years earlier at York Theatre Royal itself. Designer Ian MacNeil’s breathtaking set and Stephen Warbeck’s skin-prickling score fix this repertory warhorse in a fierce political chamber with ultimate personal stakes and an epic filmic backdrop. The foggy, slow reveal of the looming giant Birling home standing under sentinel by outsiders from wet cobbles is nothing short of spectacular. Edwardian socialism faces off with Victorian capitalism in an electric limbo; Inspector Goole (the flawless Liam Brennan) puts the upper-middle-class Birling family on a drawing-room trial so unexpected and so mesmeric that even the rain, even the war, seems to be on pause. Have bombs not fallen? Are we still in the land of the living?

“We all started like that. So confident, so pleased with ourselves. Until he started asking questions.”

His arrival gives the impression of something formidable entering a deadly lair, but any threat held by the weight of Mr Birling’s position in society, and consequent bravado, runs quietly down the storm drains during the Inspector’s systematic deconstruction of their cosy but fragile bubble. Like a snake charming lions down into the wet night street, he showcases the danger of the whims of the rich. His unassuming but persistent interrogation becomes unearthly in demeanor, more than one of the family identifying him as a gatekeeper of the afterlife. Indeed, their unraveling is purgatorial. They “will be taught it in fire and blood and anguish” that we are all responsible for each other.

As piercingly pertinent now as ever, this inspector calls time for change on our broken world. It’s time to tear it all down and start again. We may think we are a nice, well-behaved family, but can we answer for all our actions?