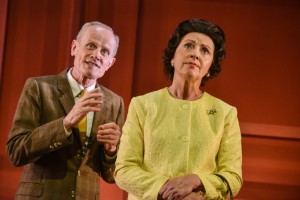 Another chapter in York Theatre Royal’s collaboration with Theatre by the Lake, this Alan Bennett double bill directed by Tom Littler brings together two plays: An Englishman Abroad and A Question of Attribution.

“An allegory of supposition”

Each play focuses on a member of the Cambridge Spy Ring; first Guy Burgess’s exile in Moscow, then Anthony Blunt as he continues to work as the keeper of the Queen’s art collection. What is at first glance an immersion into the murky world of the Cold War, is actually facilitating, in true Bennett style, multiple extended metaphors. In the two-hours-twenty-minute run time we are thoroughly schooled on issues of Englishness, martyrdom, appetite, class, identity, and above all Art with a capital A.

“Paintings are not there to be solved”

Schooled is the word in the second play, A Question of Attribution, which demands intellectual concentration from its audience. A more cerebral affair than its counterpart, it feels longer, looser. Having the action flit in and out of a lecture on Art History serves its purpose well, and James Duke gives a sensitive and nuanced performance as Blunt. However, his meetings with the police officer and, later, The Queen, don’t quite manage to satisfy our need for stakes and tension. It all rather stays in the mind and keeps warily away from the gut.

“It seemed the right thing to do at the time”

An Englishman Abroad is the tighter of the two halves with a playful and enigmatic performance from Theo Fraser Steele as Burgess. Boundaries between right and wrong, fact and fiction, are blurred in Bennett’s scripting of the historical meeting between Burgess and the actress Coral Browne, played with real relish by Karen Ascoe.

Louie Whitemore’s set comprises an impressive revolving stage and multiple empty picture-frames which the audience are prompted to fill with interpretation, and there is a clever nod to the other three Cambridge spies at the end which gets some deserved nods and intakes of breath from the audience as if to say, “He’s a clever one, that Bennett, isn’t he?”