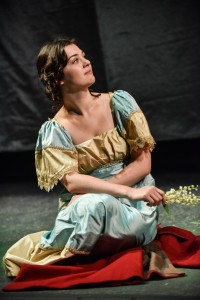 Keswick-based company Theatre by the Lake are making a new home for themselves in York Theatre Royal this autumn. The rep season opens with Jessica Swale’s adaptation of the beloved Austen classic, Sense & Sensibility, directed by Juliet Forster.

“We’ve the best berries in Sussex; we pick them ourselves.”

The charming tale of the Dashwood women finding their comforts in unexpectedly hard times plays out in a play-tent of muslin and video projection, the delicacy of their most vulnerable feelings looming larger than life throughout confessions of chaste love and sisterly devotion. Water sculpts the action too, whether spotting rain, trickling brooks or stifled tears; ever-present on the overhead cloths and video screen backdrop.

Designer Barney George’s lilac, cream and teal palette furthers the unapologetic femininity of the story, while filmic conceits and performative nods gather a medley of homage to previous adaptations, not least in a reflection of Emma Thompson’s definitive portrayal of Elinor (here played by Sarah Kempton). A community of women past and present have made this production what it is.

Patient transitions like period dances take us from city to country, impressively smooth costume changes delivering a dervish of visitors. Christine Entwisle delivers a marvelous comedic double-act as Fanny Dashwood and Mrs Jennings, while Alice Imelda (Marianne) and Lydea Perkins (Margaret) give the sisters the heart and liveliness the story needs. Margaret’s passion for nature is infused in us through drifting shadows of swaying trees and birdsong; Marianne’s deep yearnings for affection made plain. The effect of the montage is of natural outdoor life; fluid, and peaceful.

“I think it would be better to be a sea star.”

Sweet, delightful and comic, Marianne is very much front and centre in this show that forms a love letter to women in love. She tells us to be bold, be honest, be passionate, that we may regret nothing.