Grease is the Word: musical review 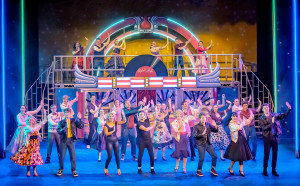 York Light Opera in ‘We Go Together’, Photo by Anthony Robling

Grease needs no introduction. Those expecting to see the 1978 film adaptation acted on stage may be surprised by York Light’s latest production, which more closely follows the lesser known original stage show. Never fear, however – cheesy songs, lovable characters and the happy ending we all know (and perhaps question) are still the staples, with just the right sprinkling of comedy to boot.

Impressive set design and colourful costumes aside, the cast are what make Grease the show to see this February. Their energetic chemistry is contagious for both the audience and each other, bouncing from scene to dance routine for the full two-hour set. York Light create an almost immersive experience at Rydell High – it’s easy to forget that Sarah Craggs isn’t actually the endearing Sandy and Sarah Bruce isn’t the unforgettable Patty. James Horsman (Danny), Jack Armstrong (Kenickie) and Emma-Louise Dickinson (Rizzo) in particular won the audience over quickly with stand-out performances of everyone’s favourite songs. The cast are occasionally let down by staging, at times too full or too empty; Craggs’ ‘Hopelessly Devoted to You’ is far too amazing a rendition to be relegated to the very back of an otherwise empty (if beautifully designed) stage. However, no space is too big or too small to distract from the sheer talent of York Light: this is one experience of Grease you want to avoid singing along to.

Director Martyn Knight puts his own spin on the well-known classic, where comedy is the most striking deviation from the 1978 film. Finn East and Fiona Baistow provide one of the most unforgettable elements of York Light’s production in their hilarious partnership as Roger and Jan. Their characters are a budding couple which the audience seemed to be rooting for just as much, if not more, than lovebirds Danny and Sandy. When either of the pair are on stage, it’s hard not to notice their kooky characters’ delightfully funny body language and expressions – definitely something to watch out for. The comedic elements are the perfect balm for an otherwise rather dated storyline, bringing Grease to the 21st century without making a statement. Unless, that is, you count a glimpse of East’s underwear as such.

Overall, Knight toes the line between those who want to see a fresh interpretation and those who just want their old favourite musical. Anyone who might be hoping for a feminist or otherwise political angle might be a little disappointed, however. While initially it seems that Sandy (Craggs) may be a feistier character than we’re used to, with looks that could kill and even some hair-pulling, any real divergence is dissipated by the time we reach “You’re the One that I Want”.

This isn’t such a bad thing –  Grease isn’t, and never really was, about making a point. Grease is about having fun with a bunch of 1950s all-American teenagers and the songs you’ve been singing for years. With a sparklingly colourful and creative cast and crew, York Light’s Grease is automatic, systematic and fantastic.