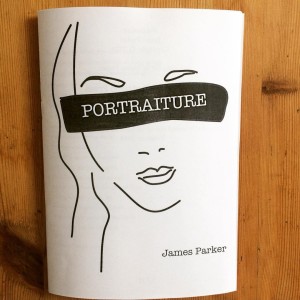 Portraiture is a poetry collection by York-based writer James Parker, containing verse which captures glimpses of Parker’s close friends and loved ones in intimate one-page poems.

The collection begins with physical descriptions of the subjects, which avoid the trap of becoming flat collections of adjectives describing specifics of appearance but instead through the emphasis on dynamism and setting manages to note their body within a moment. Portraiture can conjure up images of people sat motionless in stiff poses as an artist carefully transcribes every physical detail, but Parker’s subjects push and relax, stretch and shake in a way that brings them to life.

As the collection reaches the centre, the order of the subjects is mirrored, and the poet turns his lens to voices rather than appearances. Again, rather than outright descriptions, Parker instead fully embodies the voices of his subjects in first person verse. Through this, the variance in language, tone and even speed and length of lines become unique to each subject and give a genuine sense of understanding of their idiosyncrasies.

Parker himself does not escape his own poetic scrutiny. His self-portraits are folded between those of loved ones, rather than bookending the collection or being set at the centre. This creates a collection where the poet is neither a flaneur looking from the outside in nor a centripetal force holding people in orbit around him, but instead he sets himself as an equal.

Portraiture reads like a fraternal love letter, effectively capturing not only the poetic likeness of loved ones, but also the tenderness felt towards all of the subjects contained in this collection of luminous poetry.

Having moved to York to study English and Creative Writing, Parker now works at the University of York alongside writing. His poetry has been featured in Ink Sweat & Tears, Black and Blue magazine, and others. Portraiture is his first collection.

Portraiture sold out a limited run upon its release, but you can view more from Analog Submission Press here.