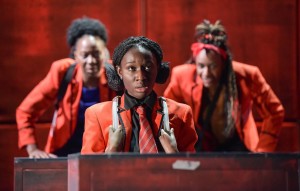 The auditorium fills (and truly fills) to the oppressive sight of a large neon red circle sitting inside a square and dissected by an X. Anticipative buzz is evident among avid readers and teachers, school parties turn out in force to see the themes they’ve been meticulously analysing brought to life. When the circle is raised, it is replaced only by an arguably even more suffocating abstract box space made up of dusky red square panels that will serve as school, beach and rebel den with little transformation. The direct address, heightened performance style and formidable sincerity of theatre aimed at young people make this an accessible show for some, though this is undone for others by abrasive technical design – this is not an experience for those sensitive to flashing lights, fearsome white noise and a crowd who prove to be a sensory nightmare. It’s a big, bold, battle cry of a story with the weight of centuries behind it, and there is much to talk about, so it’s unsurprising that the audience are full of frantic energy from engaging with it.

“Us Noughts have to find dignity somewhere. I find mine in truth.”

For those unfamiliar with the original novel, the series takes place in an alternative 21st-century Britain in which Africans have gained a technological and organisational advantage over Europeans, the former having enslaved the latter. Alongside landmark shifts in Hollywood’s mainstream, Blackman’s story sits perfectly next to the likes of Black Panther, Hidden Figures and the proposed Black America. Why not re-imagine our world? Especially when the most recent global wave of hate crime is such an ugly truth to witness.

Can you afford to be wrong?

The script reverses recognisable tropes to highlight their ridiculous nature; Sephy is fascinated with Callum’s natural hair, Callum can recite historical revolutionaries who didn’t make the textbooks because they were white. Enlightening snark lays bare everyday facts that the advantaged don’t have to think about, like that plasters only come in one skin colour – glaringly obvious when stuck to those they’re not made for. A black-hooded executioner raises a Nazi salute before he kills. Everything is incongruous with what we know, and yet is so blindingly familiar, down to the character names; the middle class Persephones and Minervas with their alcoholic, unfaithful parents and the working class Callums and Ryans with their mistreated father left vulnerable to radicalisation. Orange juice is a luxury to Noughts. The sudden displacement of our cultural memory is perfectly discomforting.

Sephy (Heather Agyepong) and Callum (Billy Harris) head up the cast as the young lovers from different sides of the tracks; Sephy a privileged, liberal Cross and Callum a careful, torn Nought. With perfect, punchy timing, the two drive the energy of the narrative. Beginning at a point of societal shift, when whites (Noughts/’Blancas’) are going to attend school with blacks (Crosses/’Daggers’) for the first time, the teens’ journey spans years and feels vast. Music and sound by Arun Ghosh and Xana places us often outdoors, in spaces where we cannot touch walls – we could be in the ocean or the sky. The time could be any. The action comes thick and fast, with every corner of human experience pushed to its extreme – you can see why the story is studied at a certain age. The successful touches of youthful hope and humour of the opening are within the collateral damage of an evening that quickly picks up speed to hurtle through legal trials, reprieves, terrorism, and a teen pregnancy narrative co-opted by the entitled triumvirate of family, media and government. Truth is savagely fought over, as is power.

Delivering haunting, futile tragedies, huge questions on world politics within the home, and fraught, complex depictions of love, sex, integrity, identity and dissociation, the show sometimes falls back on exposition-heavy narration by Sephy and Callum but somehow also doesn’t quite have time to breathe – much like the lovers themselves, constantly running, “not from, but to something”. Indeed, a gasping physical motif representing Callum’s panic attacks and Sephy’s ominous speech invoking the looming dread of icebergs encapsulate this world that will have you tight in your chest. “No matter what, old friends stay in the soul.” Debriefing is recommended.