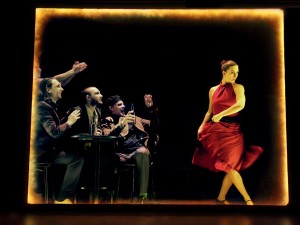 Thumping beats, heavy panting and garbled multilingual speech frames Gecko’s new show, Missing. The multi-award winning and internationally acclaimed physical theatre company dive head first into the sensual, visceral, raking sounds of the psyche in another piece that defies intellectual trappings by speaking to us via the non-verbal seventy per cent.

At the core of the story, if we may be so crass as to call it so while our linguistic lexis lacks exactly what Gecko deliver in abundance, is the decaying soul of a woman: Lily. Pulled in every direction by lovers, colleagues, memories and travelators, Lily and what we may consider her many consciousnesses also house inexplicable bursts of electrons.

Bodies like stars violently tear themselves apart to drift in space split-seconds before imploding and repeating. Shadow has never been used so boldly to give new meaning to what little sculpts of light we are permitted. Social fronts are unpicked to savage beasts, plaited muscle writhes beneath red silk and breath threatens to leave us in between a haunting series of happenings; moments from the past framed in Vettriano glow, and the thrum and flicker of club lights and TV screens in the present.

Lily’s focus drifts evermore toward her parents in her childhood, holding them under a magnifying glass like she is torturing ants. An ethereal, nightmarish concoction of grace and tension, elements of Missing are reminiscent of the cycles of violence and tenderness within abusive relationships. These scenes, juxtaposed with the premature autopsy of anxious adult Lily, proffers the question of what we teach each other to become, expect, endure. Framing and re-framing both herself and her memories, Lily is awash in a deli of choice for context in which to anchor herself.

Lead by Creative Director Amit Lahav, with notes of Dario Fo and early German Expressionist cinema, the Missing ensemble hold up a mirror to the grimy, impressive mechanics of the human being. It is a primal dissection of wolves and bears, a show that has literally lived through fire, destruction and rebirth, and you do not want to miss it.