They Don’t Pay? We Won’t Pay!: Brexit and vegetable homebirths 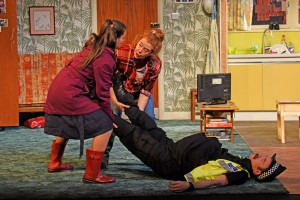 York Theatre Royal continues its most interesting and divisive season yet with this raucous radical farce that brings Dario Fo’s intense and absurd political comedy from 1970s Italy to 2018 Royston Vasey via the Jarrow March.

A show for the demonstrative and strong-hearted, Fo’s sublime script sings in the playful hands of Northern Broadsides; one of the best-placed companies performing today to bring working class heroes to the forefront of our divided worldwide narrative. All the characters are played with love and respect by the tight ensemble of Lisa Howard, Steve Huison, Suzanne Ahmet, Matt Connor and Michael Hugo. The cast play the audience into the auditorium with Ewan MacColl’s ‘Dirty Old Town’ before retreating to the sound of sirens. The room responds heartily from that moment on.

While times are tough and stakes are high for our resourceful fivesome cast, the mounting pressure on the rent and gas aren’t enough to quash their faith and patience in each other. Namedropping Brexit and other current affairs, the show packs a punch not just in its open pantomime ribbing but mostly in its unflinching dive into the grey. Characters are forced into re-evaluating their principles, whether that means sticking to them more stolidly or relinquishing them in the face of impossibility.

Jack (Huison), a heavily-coded left-leaning Leaver most outraged by single use carrier bags, sits on his hands and suffers the painful irony of watching indulgent cookery programmes on TV while being unable to afford groceries. He is obliged to unravel his disgust at lawbreakers after a harlequin Marxist-Constable-Capitalist-Sergeant (perfectly pitched by Hugo) spins him around so many times he couldn’t pin the tail on Europe. The Constable reminds us that not everyone has the privilege of choice, and effects pause for thought simply through his own wealth of empathy. “I am an office of the law, Sir, we don’t make judgements on appearances!” Ultimately, Jack realises there is no reward in his self-elected martyrdom, and adopts the priorities of the poor. Should they not hope for better?

Bookended by soft fades reminiscent of Alfred Hitchcock’s ‘Frenzy’, the scene is set for dark, silly deeds giving way to the release of pathos at the end of the night’s manic capers. Vegetables are gestated and birthed, saints are evoked, policemen are possibly murdered. If the riotous action leaves the crowd lost in laughter, they are found again in the brave, stern humanity of the direct address. If we believe in a true National Health Service, why not believe in baby transplants? While the show sees at least one early walkout, it also earns a partial standing ovation, proving the vitality of modern theatre many times over.