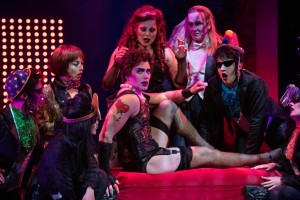 Since its first appearance at The Royal Court Theatre in June 1973, Richard O’Brien’s The Rocky Horror Show has become the world’s favourite rock ‘n’ roll musical. It has been performed worldwide in over thirty countries in every continent and has been translated into more than twenty languages. To celebrate the fortieth anniversary, Director Christopher Luscombe created a brand new production for a year-long UK National Tour.

For “all six of you” uninitiated folk, the story follows straight-laced couple Brad and Janet (James Darch and Joanne Clifton) as they experience some car trouble and decide to appeal for help at a nearby ominous castle – you know, one of those that we have laying around every few hundred miles or so. Things quickly descend from the hospitable to the intimate to the downright otherworldly, the innocent pair being tempted into new sordid depths by a menagerie of colourful characters living under the reign of ‘Sweet Transvestite, Proud Trans-sexual’ Frank N Furter (Stephen Webb). The unpredictable antics are storytold by an omniscient Narrator – a thoroughly-heckled Steve Punt, who carries the pantomime audience engagement with finesse, even where it is apparently unscripted.

Filling the room with a resourceful ensemble larger than life, this obscenely sexy, wild and thrilling production does not disappoint. Set Designer Hugh Durrant nods warmly to the Picture Show adaptation by weaving a silver screen film-cell strip across the heavens, thinly masking the live band, and doesn’t forgot the little things either – close attention is rewarded with the realisation of a scrotum-shaped doorknocker. With costume by Sue Blane, choreography by Nathan M. Wright, lighting by Nick Richings and sound by Gareth Owen, the production values are through the roof.

Laura Harrison and Kristian Lavercombe give sumptuous performances as Magenta and Riff Raff, showing off incredible voices and personalities that are so richly spot-on they are sewn into the DNA of the spirit of Frankenstein’s Place. Callum Evans delivers a pleasingly cheeky-while-pious (in his own way) muscle-babe Rocky, and Miracle Chance is a perfectly doolally Columbia. Harrison’s Usherette also starts and finishes the evening with a bang, sending up the soaring tunes with you in the palm of her hand.

This orgasmically tickling, delightfully unbound, decadent musical romp will have you shivering with antici…