In at the Deep End: Metta Theatre presents Little Mermaid 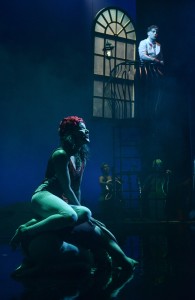 The dream-like quality is muddied somewhat by an awkwardness in some of the more ambitious melodies and acro-balance pieces, adding a touch of discomfort to these sequences, perhaps purposefully to convey that Little’s naive aspiration makes her a fish out of water.

The radical feminism purported by the company is somewhat absent; before we get to an ending that is the bare minimum of role reversal, we have to sit through songs preaching “He’ll Only Love You If You’re Perfect” and squeezing our heroine’s waist into an elastic cage – perhaps comedic, but the irony doesn’t quite overwhelm the pervasive sense of oppressive traditional gender norms, particularly for those who are assaulted by them every day, and most likely going over the head of those who aren’t. This is an even bigger shame considering the claimed gender fluidity under the sea, which was even more elusive in action despite having all the tools and awareness in place to explore and celebrate this for those in the next generation for whom the relationship between body and gender will be more pertinent.

Catches of the Day are the nubile Prince (Matt Knight) and adept Careful (Rosalind Ford), whose talents lead the troupe in what is after all an absorbing, lulling piece of theatre rich with layers of dance, circus, physical theatre and song.

This review was for a performance at York Theatre Royal on Wednesday 4th April. Catch the show on tour here.