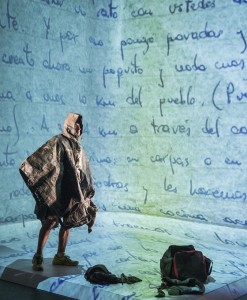 When writing reviews, you’re encouraged to keep your personal context at bay – no one needs to hear about your own history with pantomime or Shakespeare and how it skews your view of a production. However, LIFT’s incredible, raw production is all about the specifics of individual experience being tilled to form a whole truth, and its value is in the personal detail.

The cost of activism on one’s wellbeing is at the forefront of our collective consciousness right now, and is clearly cradled in the minds of these creators as they unwrap the truths and myths of the Falklands (Malvinas) War with tremendous care and trust; in us, in each other.

Lola Arias directs this resourceful multimedia production, seamlessly carrying us through intertwining tales from each veteran with respect and sensitivity, and without judgement, allowing us to see through their eyes the thousand shades of grey between one side of a dispute, and the opposition.

As a viewer who came of age around the millennium, this war was previously only reported through my parents’ private political gripes and a vague but potent widespread distaste for Margaret Thatcher. While WWII continues to be force-fed and fetishised throughout British education, arts and media, the Falklands war was neglected in school, and as with the wars we did study, we were presented one hard and fast version of the events. It took until now for this reviewer to be exposed to such a balanced curation of experiences on the subject of war, which can only highlight the failings of our education system and the importance of the arts in our continued understanding of our world.

Who lives, who dies, who tells your story?

One thread the veteran performers revisit in the piece is, “What is going on?” There is a haunting bemusement that lingers over war, and this show illuminates that this is largely due to the voices that will be forever missing from the narrative. Each survivor can speak only for themselves, and they speak volumes, but the debrief trails off there.

There is however a powerful sense of hope in the simple act of presenting these stories. They span childhood, service and aftermath. Old enemies place themselves in each other’s compassionate, trusting touch throughout the show, and we are left with a pacifist Gurkha poem, untranslated and retaining a gentle mist over the experience.

This is a show that needs to be seen live. The men need to be met, their stories need to be seen and heard up close. The show is running now until Saturday, tickets are available now from York Theatre Royal.

One Response to The Cost of Truth: LIFT presents MINEFIELD