We Are The Daughters Of The Dystopia You Failed To Unwrite: LEGACY at York Theatre Royal 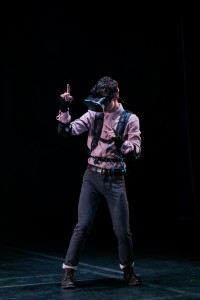 A community ensemble cast aged 16-19 and over 65 are brought together in York Theatre Royal’s first intergenerational project; a dystopian devised piece holding up a two-way mirror to the ways in which we apply technology.

Paul Birch’s newly commissioned script, filled with smartphones, cameras, microphones and automatic broadcasting, is infused with the messages of Nineteen Eighty-Four and Black Mirror. How far do we, and can we, use and trust our technology? And how is access to that technology governed?

Ominously animate lighting by Simon Bedwell and disjointed, flickering backdrops by Ed Sunman frame a narrative that splits almost into an anthology, befitting the implications of infinite constructed truths, encroaching worlds and exposure. Truth is overlap and contradiction. A pre-packaged modern soundtrack adds to the sense of mass production and dehumanisation of consumer technology, while technology itself takes on a character and living relationships of its own. Some of the more human sequences, in contrast, are so quiet and still as to reflect the loneliness of the void they are crying into. Deft performances by Robert Sinkinson as the light-hearted Toby and Adam Kane as sunny YouTuber Axis stand out among the cold chromatics of this vast story.

“How much time do we really have?”

With both Ready Player One and GDPR floating in the periphery, the urgency to build some kind of legacy is so pervasive that everyone is implicated in a saturated melee of pleas to be heard, remembered, at the cost of their privacy and ultimately their agency. The rising anxiety of this microcosmic society is palpable, and more than recognisable.

The process is perhaps the most interesting aspect of this production; the cast investing in Stanislavskian research into their own online footprint to inform the senses of exposure, self-examination and self-editing very present in Legacy. The show itself is a legacy of the original functions of science fiction – a heightened mapping of the present – with hangovers of the video game violence debate.