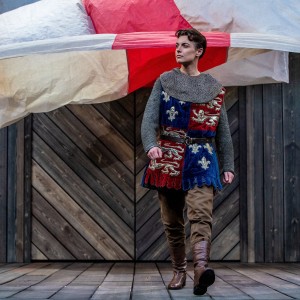 The show flows seamlessly through costumes (designed by Adrian Linford) spanning many different eras of conflict, with poignant composition by Eamonn O’Dwyer and effective scenic design by Max Dorey – the bold, billowing flag of St. George swathes Henry’s throne before becoming bloodied and torn in his wake. The chorus frame the action with modern naturalism, leaping from among the audience onto the stage to tell a story that appears at first innocent and peppy, one of a hero.

Bain plays the caddish young orator king with a committed front of terrier-like swagger and rich-brat bravado, later complicating the popular Hal with swift strategical turns and dredging him through a crisis of responsibility, but ultimately maintaining his belief in the righteousness of his cause. He is a rousing speaker fit to set you questioning those you trust to speak on your behalf; within three hours we witness him assert a firm example of three would-be-assassin advisors, a comedy in the moment not least due to Leander Deeny’s startlingly apt impression of Boris Johnson as Sir Thomas Grey, and not least owing to Henry’s moral upper hand, and then the demonstrative nature of his leadership becomes more and more ruthless, and even his most devoted followers are put to a trial of faith.

Deeny and Christopher Logan send up delectably Pythonesque Frenchmen to taunt the English soldiers, many of their mockeries sadly undeniable and cuttingly relatable to all the justified derision aimed our way in light of Brexit. When more apt to question our leaders’ decisions, than before we are but a ‘happy’ few?

The cast serve the characters well, Jessica Dennis and Scott Hoatson standing out in action-driving roles that they fill with magnetic, evocative feeling. Charlyne Francis and Alexandra Guelff as Katharine and Alice engineer the language lesson scene with perfect pace, building slowly to a satisfying volley of tennis grunts, Flo Wilson as Queen Isabel raising the whole house along with her eyebrows at Katharine’s gleeful mockery of English even as she learns it. The raw, abrupt and brutal death of Francis’s Boy from the Boar’s Head Tavern after the noise of the battle is shaking, as is Peter Moreton’s quick on-stage execution as Bardolph. In the rushed resolution between France and England, Sam Callis’s camera-face handshake as the besuited, be-man-bunned Charles VI is also a highlight.

The choreography is excitingly fraught and pleasing, Bain climbing up and around ladders being spun and tilted, actors being puppeteered in gentle acro-balance to bring a spring to each scene and transition, and others dressing and undressing as they speak, adding a captivating layer of concentration and involvement to their actions that keep the audience present.