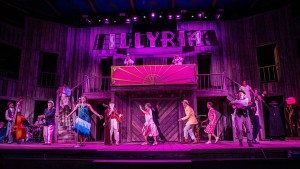 The cast of Twelfth Night, photograph by Charlotte Graham

If Hamlet is the prince of the domestic Scandi thriller, Twelfth Night is the king and queen of the upper-class rom-com. Finishing off Shakespeare’s Rose Theatre press run with a bang, the Gala night performance of this classic comedy of mistaken identities plays to a house full of bodies, beer and hormones. Following a heartfelt speech about the project in its entirety from originator James Cundall MBE, the evening sets off on its raucous voyage.

Director Joyce Branagh fills the groundlings pit with the charming ensemble cast dressed in kitsch sailor outfits (Sara Perks’ 1920s-ish costumes delight again throughout), hoisting the SS Cesario above their shoulders and dancing through the crowds to Wreh-asha Walton’s vibrant singing as Valentine, before breaking the ship apart in a celebratory fashion to recreate the shipwreck that casts twins Viola (Olivia Onyehara) and Sebastian (Marcello Cruz) asunder and sends the former seeking work on the strange new shores of Illyria.

The rowdy festival atmosphere continues as the action unfolds with expert clowning, particularly by Alex Phelps as Sir Andrew Aguecheek and Cassie Vallance as Fabian, characters often overshadowed by their boisterous ringleaders but here new stars in their own right. Leandra Ashton’s Olivia is also a joy, brimming with twin-inspired lust and Duke-induced haughtiness. Through their misguided seduction and rushed marriage, Ashton and Cruz chew the sizzling chemistry absent from the other couples, and Claire Storey carries enough of her own as a viciously funny cartoon villain Malvolio.

Music from Eamonn O’Dwyer and scenic design by Max Dorey ramp up the roaring-twenties aesthetic with summery harmonies and rosy hues. Movement Director Simeon John-Wake must have a majority of the show’s success to answer for; the physical clowning is where it sings throughout, from Sir Andrew’s perfect pratfalls to Malvolio’s ‘greatness’ being ‘thrust’ upon us, to Andrew and the Second Officer’s impeccable straight-faced hat swap.

The challenges aren’t exactly faced; Fabian’s involvement in the shenanigans is played for easy laughs as what has been accepted in theatre for centuries as idiocy, but at least for the first half hums resonance with neurodiversity, sometimes making it a discomforting jibe, and the indelible gender-queer bisexuality inherent in the text is somehow rendered mute. That said, one would be hard-pushed leave this show without feeling inspired and in love.