The Tempest at Shakespeare’s Rose Theatre: Do you love me, master? 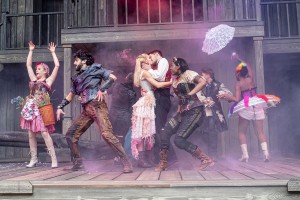 The cast of The Tempest, photograph by Charlotte Graham

Directed by Philip Franks (The Darling Buds of May), The Tempest at Shakespeare’s Rose Theatre is a bright, blustery pageant in which playful spectacle is winds ahead of the meandering story. Surrounding the incredibly dark and uncomfortable anti-hero of the abusive slave-master Prospero (played surprisingly by the soft-eyed Sam Callis) is a flurry of soft-dappled light affecting romantic underwater magic, (designed by Paul Pyant) and rousing punk folk music that Gogol Bordello would enjoy (composition by Christopher Madin). Completed with colourful costume by Adrian Linford and movement direction by Simeon John-Wake, the production serves as a showcase for its delightfully talented ensemble cast.

Leander Deeny is remarkable as the salty, enslaved spirit Ariel, caught in a mutually dependent relationship with his manipulative master Prospero. A later scene between Deeny and Callis is played beautifully, toeing the line between the heart-swelling vulnerability of their connection and the tension of their conflicting needs. Ariel’s “Merrily shall I live now?” is wrenching, particularly combined with his overwhelming urge and frustrating, brief attempt to sob.

Christopher Logan’s Trinculo, Peter Moreton’s Stephano and Raphael Bushay’s Caliban form a formidably enjoyable trio; Bushay doing nothing to defend his white descriptors in the thankless role of the dejected witch’s son. The very deliberate casting and directing choices placing Caliban as a black actor carrying his steampunk lobster claw with dignity and poise in the midst of bullying, feral faeries (most of those with large speaking roles being white, including Alexandra Guelff as Miranda: “horrid slave”; “savage”) highlights the hideous and senseless behaviour of those generally accepted as the protagonists. Who in your midst is “not honour’d with a human shape”?

The Royal party’s colonial entitlement also reeks; perhaps it is just desserts that Miranda will soon be addressed in her meet-cute with future lover Ferdinand (Alexander Knox) with dripping condescension presuming the islanders’ lack of language. It is difficult, however, to see Callis’s Prospero as cruel, which perhaps undercuts the implications that still require our attention. Caliban’s ‘Freedom’ song, joyous though it is, seems to promise a redemption and rehabilitation that never come.

Flo Wilson and Maggie Bain play gender-swapped Gonzala and Antonia respectively, bringing wonderful energy to roles otherwise crusted with expositional duties. Bain shares a long, laden gaze with Guelff (“How beauteous mankind is!”) before scoffing at Callis’s outstretched hand, somehow overshadowing the fact that she is his sister and implying that she will not accept him romantically even if they are (and they are) the last beings left behind.

The production has an ethereal lightness of foot and soul, from Deeny’s bat-like upside-down hanging in entrances to suspended smoke flares spilling out from the middle of dark spaces as if conjuring spirits. An impish, dolphin-click-whale-song chorus swarm around the lithe Ariel; the drunken trio lean joyfully into queer undercurrents. Beside the articulate, naturalist drama of Hamlet, The Tempest is a chaotic, riotous party, upholding a problematic favourite without prominent judgement.