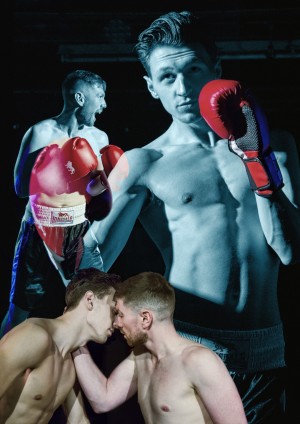 Set in the boxing ring and exploring what it means to be gay in the sport, Gypsy Queen, which played in the Theatre Royal studio on Wednesday and continues on tour, is a powerful piece of theatre in more ways than one.

In it we follow two boxers; Dane the Pain (John Askew) and Gorgeous George (writer and co-star Rob Ward) as they grapple with finding their place, their identity, and each other amidst the world of professional boxing. Between them the actors play multiple characters, each one as evocative as the next, from cheeky chappy cornerman Andy to George’s blaspheming Irish Catholic mother to Dane’s intimidating father.

Ward’s writing is well-crafted and pacy so as never to lose momentum. Monologues to the audience capture the rhythm and poetry of the boxing ring yet don’t seem out of place next to naturalistic dialogue. Pinpoint comic timing is constantly juxtaposed with moments of great tenderness; a coming-out scene is particularly well-handled, as is the moment we find out the origin of the play’s title. Sex scenes are well-choreographed so as to actually be sexy, awkward-in-a-good-way and never gratuitous; even in 2019 it is refreshing to see non-hetero sex portrayed on stage. Throughout the 70 minute running time the pair ensure the audience feels in good hands, that is until the ending comes at them like a thumping right hook.

Now on its third tour, Gyspy Queen continues around the country until 26th February. Find dates and tickets here.