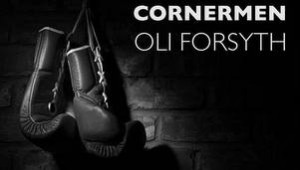 Boxing has always been a great platform for telling stories of the underdog and Oli Forsyth’s bracing play, Cornermen, proves to be no exception as it follows a tale of three trainers in search of a long-term meal ticket. This new production packs a powerful punch thanks to confident direction by Andy Love and potent performances from all involved.

Despite never showing a moment of action from within the actual boxing ring, the show capably captures the energy of being ringside and all the work that goes into getting there. It begins simply enough, with three down-on-their-luck trainers with little ambition other than to find a boxer who can keep them in the business – a ‘journeyman’. They get a lot more than they bargained for when they stumble across Sid Sparks, a fast hitter in need of direction. Before they know it, the team are rising up the ranks and their simple dreams of making a career of losing shifts to something much grander – and with much higher stakes.

While most boxing tales tend to focus on the unquenchable need to become the champion, Cornermen has its gaze more centred on the cost of stumbling into that race by accident. Sid shows little ambition initially and is confident enough in his abilities to get by, but when the victories start to mount up and the prospect of a career-ending loss to the current champion becomes very real, he struggles with the expectations being thrust upon him.  Joe Sample is excellent in the role, entirely convincing as a young man trapped by the one thing that makes him special. It is thanks in great part to his brooding body language and urgent, physically dynamic spikes of training that the fights, when described by his trainers via intense monologue, are so convincing.

He is aided immeasurably by his tight trio of trainers, led by Alexander King as Mickey, who could easily be considered the villain of the piece due to his selfish nature. But Mickey upends this by being disarmingly honest about his motives. There is a great bristle of rivalry between him and Sid that is mostly unsaid but is nevertheless well communicated via overly vigorous training and contemptuous glances. It is perhaps one of the few disappointments that more sparks don’t fly between these two over the course of the story.

The remaining cornermen, Joey and Drew, portrayed by Claire Morley and Martyn Hunter respectively, provide the backbone of the team as they try to keep Sid and Mickey on the right track. Both are entirely convincing, with Morley providing some much-needed levity as a former boxer who was never good enough, while Hunter hits all the right world-weary beats as the old war dog trainer who’s seen it all. Over the course of the play, both go to great lengths to keep the team together and this is a huge part of what makes the final act so engaging. Despite all the doubt and underhanded methods, it is hard not to get caught up in the final match up, which manages to thrill despite not a single punch being seen.

The finale is not the only standout scene, with a celebratory night out being amusingly energetic and a tension-filled one-on-one between Sid and Drew being a genuine dramatic knockout.

The unassuming location of the Basement Bar at City Screen York works remarkably well, with the small town social club origins of the story being well suited to it. Once the narrative leaves these places behind, it serves as a strong reminder of where the players came from and where they may well return. As Mickey notes at the opening, boxing is a cyclical beast, and only a rare few get to go back around.

One Response to Cornermen: A hard-hitting underdog’s tale